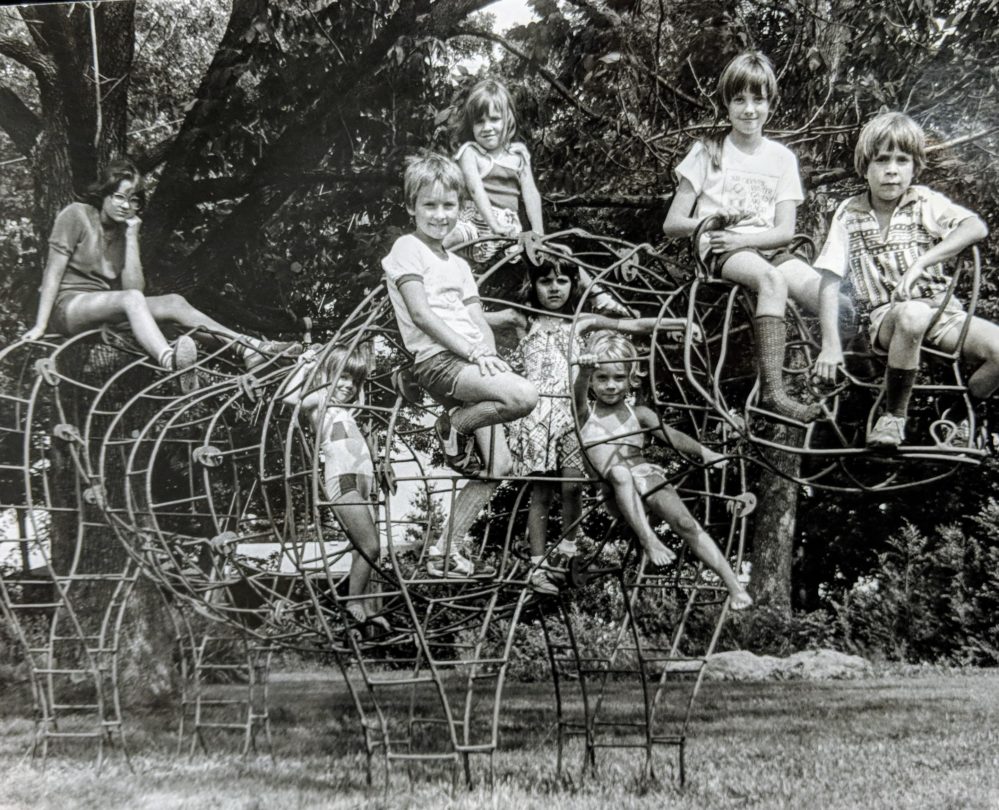 Rhino Gym has been a part of the Museum’s Collection since 1981. During this time, it has been loved (and climbed on) by many. Unfortunately, all of this love, climbing, and exposure to the elements has left the rhino in poor condition. The paint has faded drastically, and it has seen significant loss of paint.

Why is Rhino Gym Going Away?

After four decades (since 1981) of being outside and enduring weather and so much playtime, Rhino Gym is worse for the wear. Due to the resulting, current condition issues (worn paint, exposed metal, etc.), we have posted signs asking the public not to climb on the sculpture, but the signs get taken down. Plus, it’s challenging to communicate that the work is not meant to be climbed on with a title like Rhino Gym!

Stay tuned for updates on future installations of sculpture in the courtyard!

Where is Rhino Gym Going?

Rhino Gym has been moved off-site for storage, and, while we know the people of Asheville will miss it, it’s time to give the rhino some much needed rest. We will miss it, too!

The Man Behind the Rhino

A musician and member of the Piedmont Craftsmen, Ira DeKoven first received training at Antioch College, where he studied art and engineering and also took welding classes at Hobart Welding School in Ohio. Later, he studied blacksmithing under Frank Turley in New Mexico, and pursued his MFA at Cranbrook Academy of Art (1996). When DeKoven moved to Yonges Island, SC (near Charleston), he apprenticed to renowned African American blacksmith, Philip Simmons.

Afterwards, he operated out of Walkerton, NC (near Winston-Salem), where DeKoven received the George Black Award from the Community Appearance Commission of Winston-Salem and Forsyth County (1992). In his later years, DeKoven turned to jewelry-making in enamel, copper, brass, and silver. He was known for commissioned work that was both functional and decorative.