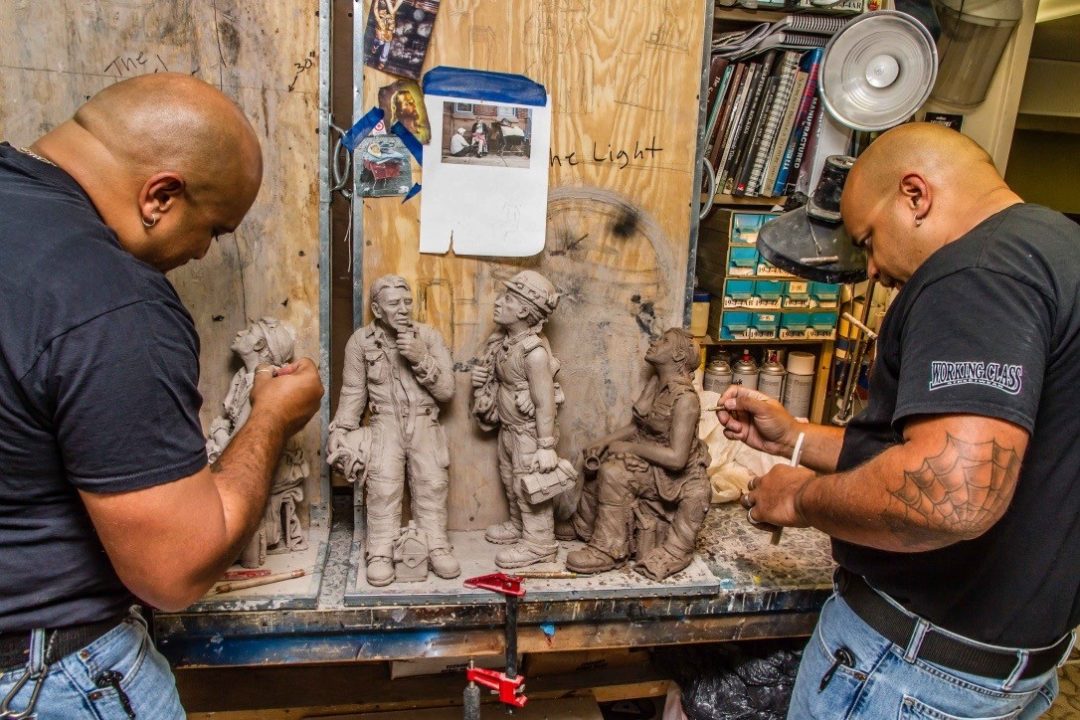 Identical twin brothers Kelly Phelps and Kyle Phelps are professors at private Catholic universities in Ohio. Kelly Phelps oversees the sculpture department at Xavier University (Cincinnati), and Kyle Phelps is head of the ceramic and sculpture departments at University of Dayton (Dayton). Much of the twins’ work is about blue-collar workers, race relations, and the everyday struggles of common people. The Asheville Art Museum holds in its Collection the work John Henry (Series 3), a mixed-media sculpture depicting a contemporary rendering of the folk hero John Henry.

The Phelpses continue to work collaboratively to create artwork and share a studio in Centerville, OH. They share numerous grants, regional, national, and international exhibitions, and commissions. Their work is also included in many museum collections across the US; notable private collectors of the twins’ work are film director Michael Moore and actor Morgan Freeman. Their work has been reviewed in major magazines such as Ceramics Monthly, Sculpture, and American Craft.

Before entering the world of academia, the Phelpses experienced firsthand the struggles of the working class. They grew up in a blue-collar factory town in Indiana. They were inspired by family and friends who worked in various manufacturing plants, steel mills, foundries, coal mines, and railroads in the American Midwest, Rust Belt, and Appalachia. These everyday people became working-class heroes that have inspired the twins’ art for more than two decades.

For several years, the Phelpses have juxtaposed handcrafted sculptures cast from clay or resin with found, site-specific objects. They have combined gears, corrugated metal, and scrap-machined parts with modeled figures to create visual narratives about the blue-collar experience. Abandoned industrial sites such as factories, steel or textile mills, warehouses, coal mines, and railroad yards are the primary sources where the twins find, archive, and re-purpose found objects for their narratives. Some of the objects are soot-covered or soaked in cutting machine oils that emit a distinctive odor commonly found in automotive factories. These elements combine to give their work an authentic sense of place and time.

The twins are deeply inspired by religious iconography such as relief sculptures used in churches to represent the Stations of the Cross. The Phelpses recognize each worker depicted in their narratives as those who go to work every day “religiously.” To further the metaphor, the workers in each narrative personify a congregation; their work settings (factory, steel mill, foundry, coal mine, etc.) symbolize the “church”; and each finished work is constructed like an altar or shrine dedicated to working-class struggles.

ASHEVILLE ART MUSEUM: DESCRIBE YOUR CREATIVE PROCESS. DO YOU WORK TOGETHER OR SEPARATELY?

Kelly Phelps and Kyle Phelps: Our creative process always begins with research first. We conduct interviews, visit actual sites, and collect and archive artifacts from the sites. We then work up sketches for the figure. We choose the best pose and begin to sculpt the figure as a solid form. Once the figure is sculpted and hollowed out, it is placed on a drying rack for a week in preparation for firing. When the form is fired, we then begin the surfacing, which includes priming and hand-painting with oils and acrylics. Once the figure is painted, the frame is constructed from repurposed wood from an old railroad spike crate. A found object like a railroad spike is attached. The figure is mounted, and wall hangers attached.

All of the work is completed in a small studio where we work together, usually side-by-side or back-to-back, kind of like working on an assembly line. We typically work on four to five pieces at once. This allows us to work on several pieces at the same time, which increases our output and production. There is always something to do, so we never get bored.

CAN YOU TELL US MORE ABOUT THE JOHN HENRY SERIES?

He was an American folk legend who was also known as the “steel-driving man.” He was a kind of underdog who tried to save railroad laborers’ jobs by competing against the modern technology of the time, which was a steam-powered hammer. He and his human-powered hammer beat the steam drill, but he died soon after. There were very few career opportunities outside of farm-laborer jobs for African Americans. At the time, if you were African American and needed a job, the railroad or the military was the most viable career. This is where we made the connection to John Henry. Not only did he represent our race, he represented the struggle of the working class.

HOW LONG DID IT TAKE YOU TO FINISH THIS WORK?

The work itself happens pretty fast. From start to finish, maybe a week or two. Keep in mind there are two of us crowded around the work. That equates to four hands, 20 fingers, two sets of eyes, and two brains! We can produce a lot of work in a short amount of time—much like a well oiled machine. This does not happen without the occasional argument… you are getting the sanitized version of this interview! LOL!

YOUR WORK HAS BEEN ASSOCIATED WITH APPALACHIAN OHIO. DOES GEOGRAPHY PLAY A PART IN YOUR IDENTITY AS ARTISTS WHEN YOU ARE CREATING A WORK?

We are from Indiana, where we grew up in the middle of the Rust Belt. We attended grad school in Kentucky and became professors in Ohio. Those three states where we have lived experienced the Great Migration of peoples from Southern states to the North for racial equality, better employment in the factories, as well as a chance for a better life. This helped to shape who we are as visual artists, and our belief in and appreciation for the working class.

To hear more from the artists and to see them at work in their studio, check out the first segment of season 4, episode 5 of PBS’s The Art Show below.