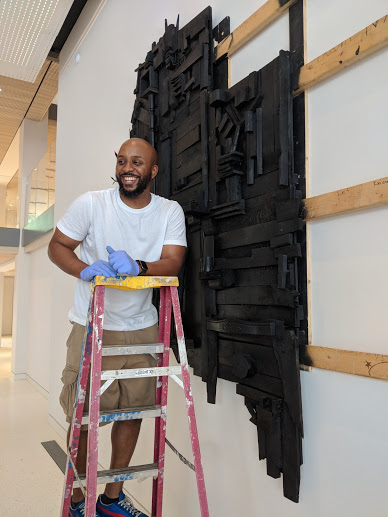 Wesley Clark is all about sparking thought. My Big Black America consists of a variety of wood, both manufactured and found, which should certainly spark thoughts in those who experience it.

As a father of two, Clark’s children were born into the United States and lived the first several years of their lives knowing nothing but an African American president. This inspired Clark, as he elaborated to East City Art last year:

The piece, My Big Black America, was my tribute to the election of President Obama. I, like many other artists, wanted to create a work that spoke to that momentous occasion but I didn’t want to do a portrait. It took me two years of working through ideas and presentations to come the one we see today. While working through these ideas, I began to realize the event was bigger than President Obama. It was the first time I, and many other Black Americans, said ‘our’ country, ‘our’ president. It was the first time we felt that we had a claim– an acknowledged claim. Listening to Carrie Mae Weems’ Art 21 talk, helped me to take a step back and realize that. So for me it was all about pride. The aged and weathered nature of the wood, brings a sense of time, of work-worn living, and speaks to founding of this country– the labor, the industrialization– it’s all in there.

When asked about his process for My Big Black America, Clark said he did not map out or plan this project in phases, rather he worked purely in the moment.

There’s no pressure to feel a certain way or say the right thing when you take in his work. He just wants you to think about it and talk about it in any way that makes sense to you. “When I’m making work, I almost purposely want it to be open for that reason, because I want people to be able to come in and have conversations within themselves about the work… The biggest thing is that a conversation is happening.”

Not only is this the first art to be installed in the new Museum, it’s also Clark’s first work in a Museum collection, so it was a big day for everyone. There is still much to do before the Museum reopens, but this marks a monumental beginning to our reinstallation. ⁣