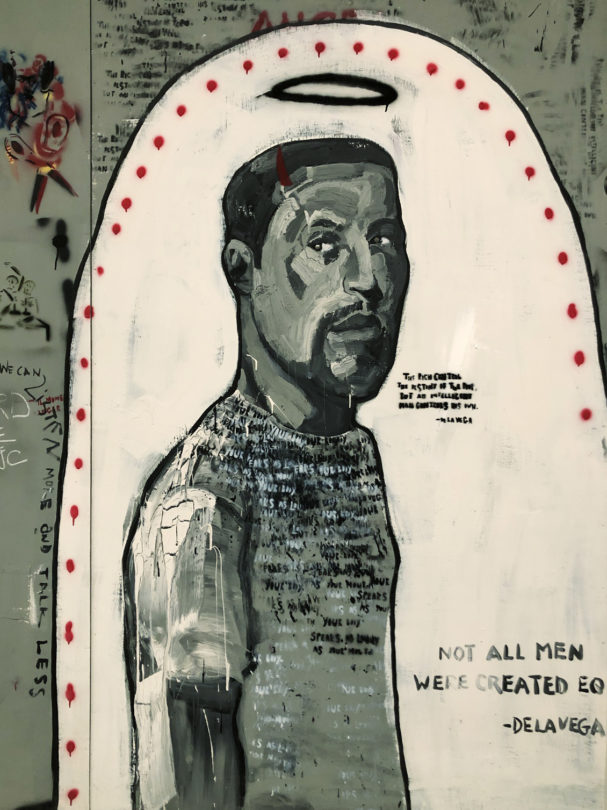 On view in Rural Avant-Garde: The Mountain Lake Experience through November 1, visitors will find James De La Vega’s Talking Walls from his 2000 session at Mountain Lake Workshop. An artist of Puerto Rican descent, De La Vega lives and works in East Harlem, NY creating murals, graffiti, and multimedia artworks that speak to his environment. He converts the walls of New York City into an open-air canvas, employing stencils, masking-tape, paint, and more to portray an eclectic combination of subjects. This approach to art-making was translated to the panels of Talking Walls, a mural-like, multi-panel artwork created during his week-long visit to Virginia in which he taught university students and participants his various image-making techniques.

His subjects speak to the diversity of his neighborhood, which includes Caribbean, African, and Latin cultures, as well as offer commentary on social-political inequities that his community faced then and faces still today. Using both contemporary and historic references to discuss wealth disparity among minority communities, details in this artwork include a repeated stencil of Spanish court painter Diego Velázquez’s 1656 Las Meninas, religious iconography, portraits, and quotations. The text employed in the artwork takes on new meaning when compared with different imagery surrounding each quote or phrase.

Throughout his visit, De La Vega emphasized the positive role that public art can play in uplifting a community. He concluded the project by leading students from Virginia Tech University in creating sidewalk inscriptions throughout campus and downtown Blacksburg, VA.