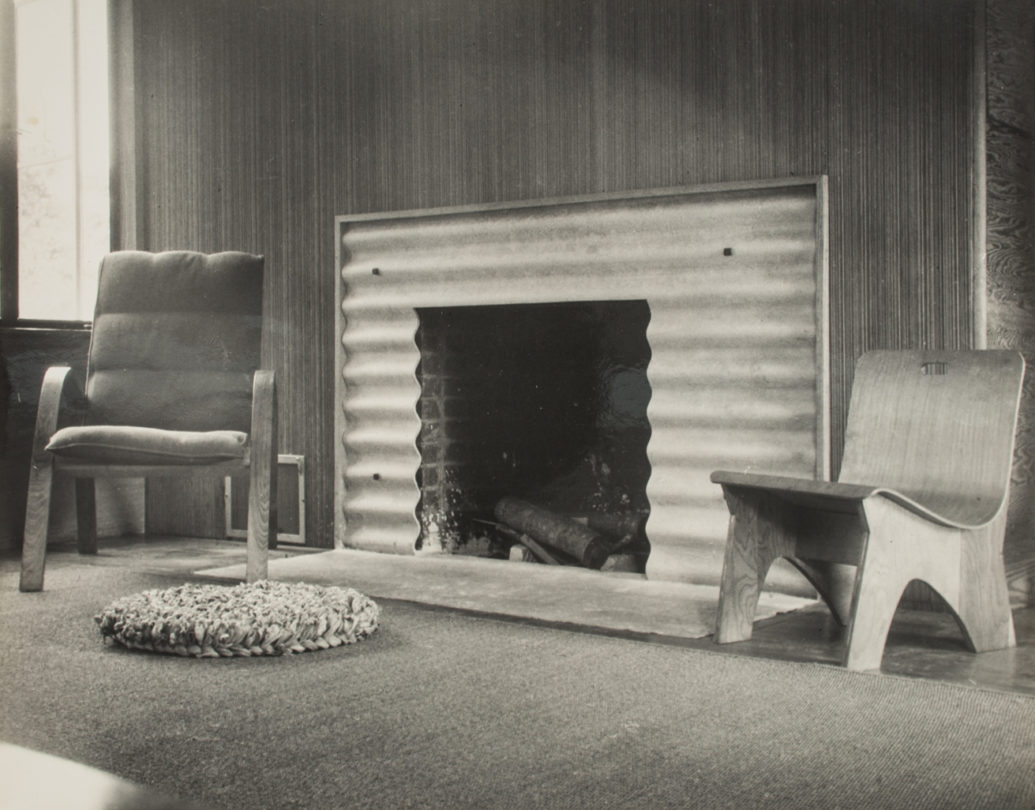 Welcome to Modernist Design at Black Mountain College. My name is Whitney Richardson. I’m the associate curator at the Asheville Art Museum.

Black Mountain College was founded in 1933 in Black Mountain, North Carolina. Earlier that year in Germany, the Nazi Party forced the state-funded Bauhaus art school, which opened in 1919, to close due to its embrace of modernist principles. Many of its faculty and students immigrated to the United States and brough with them their affection towards modern design, resulting in several American institutions that were influenced by the Bauhaus. Located just 15 miles east of Asheville, North Carolina, Black Mountain College was one such place.

The college first opened in an existing colonial revival building filled with local furniture at the YMCA Blue Ridge Assembly. By 1940, construction of new buildings began on its own campus at Lake Eden, with a modern cantilevered three-story structure soon to be filled with furniture created by students trained in the college’s woodshop. A spirit of experimentation fostered the continuation of Bauhaus design ideals in architecture, furniture, and craft in Western North Carolina.

The aesthetic environment at Black Mountain College developed when founders John Rice and Theodore Dreier brought on Josef Albers, a professor from the Bauhaus, to head the college’s art department. Albers helped design new furniture for students, invited other former Bauhaus professors to teach, who in turn brought with them their avant-garde home furnishing, and pushed the curriculum in a way that encouraged all students, whether exploring art or another discipline, to place creativity at the center of their studies.

The living room of Fritz and Anna Moellenhoff, though located at Black Mountain College’s Blue Ridge Campus in the 1930s, featured furniture designed at the Bauhaus in Germany in the 1920s. The Moellenhoffs immigrated to the United States in 1935 and were hired as faculty at Black Mountain College at recommendation of Josef Albers. While the influence of the Bauhaus arrived with Josef and Anni Albers in 1933, including its methods of teaching architecture and design, the Moellenhoff’s arrival, with their Bauhaus furniture, made that influence tangible.

The wooden furniture pictured here was designed by Albers in 1926 for the Moellenhoff’s Berlin apartment. It was fabricated at the workshops of Trunk and Company — the furniture and design business of Anni Albers’ father in Berlin. This piece of furniture originated in the Bauhaus carpentry workshop in 1925 when Marcel Breuer was the head of it. Conceived as a stool for the cafeteria, it was easily constructed, inexpensive, lightweight, and made by students. It was seen throughout the Bauhaus campus at Dessau, Germany.

Mary Gregory, known as Molly Gregory, studied sculpture at Bennington College and graduated in 1936. After graduation, Gregory taught sculpture and drawing, and worked in a woodshop at Cambridge School in Massachusetts. In 1941, Black Mountain College accepted her as apprentice teacher for the plastics workshop under Josef Albers. Within one year she was promoted to instructor in crafts and by 1942, was the instructor of woodworking. Gregory remained at the college until 1947, and during her time there she participated in the construction of the Studies Building, directed the work program, and designed furniture for the entire campus, including the personal furniture of the Dreier family that is on view in the gallery. The stools Molly Gregory made, and included in her instruction of the students at Black Mountain College, became ubiquitous in images of life at the college. Their simple, linear construction spoke not only to the need for relatively untrained students to fabricate them, but also to the influence of modernist design on Gregory’s aesthetic. In design and function, there is a direct relationship between these wooden stools and the tubular metal stools (not known as Laccio side tables) designed by Marcel Breuer for the Bauhaus. We saw these in the Moellenhoff’s living room earlier. The difference between Gregory and Breuer’s stools speaks to the fact that while the Bauhaus created furniture to be industrially manufactured, Black Mountain College handcrafted furniture out of the materials that they had, as needed.

Modernist Design at Black Mountain College is on view from October 22, 2021 – January 24, 2022. This exhibition is organized by the Asheville Art Museum and curated by Whitney Richardson, associate curator. Support is provided by the William Randolph Hearst Foundation and Julia & Jim Peterson.