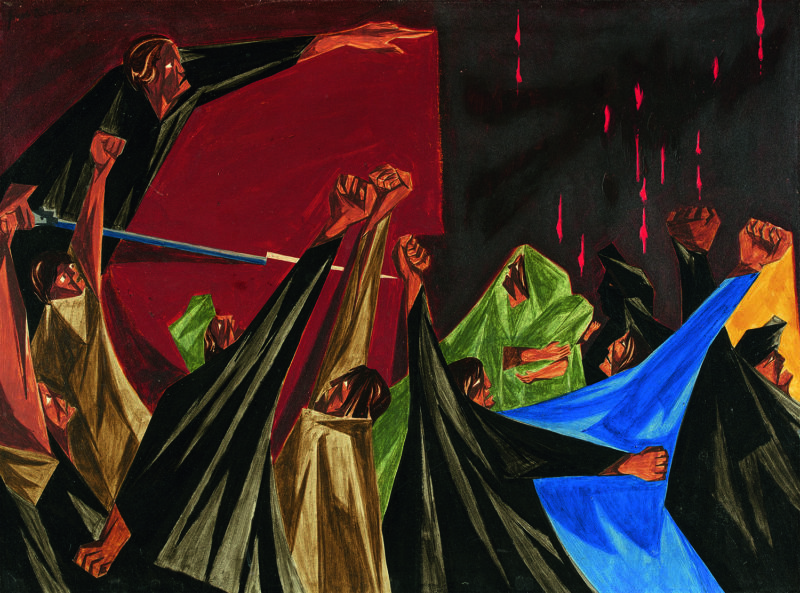 Jacob Lawrence, . . . is life so dear or peace so sweet as to be purchased at the price of chains and slavery? —Patrick Henry, 1775, Panel 1, 1955, from Struggle: From the History of the American People, 1954–56, Collection of Harvey and Harvey-Ann Ross. © 2019 The Jacob and Gwendolyn Knight Lawrence Foundation, Seattle / Artists Rights Society (ARS), New York, courtesy Birmingham Museum of Art.

This program takes place via Zoom. Space is limited; to register, click here.

Until it’s safe to travel together for our popular Art Travels day, overnight, national, and international trips, we’re thrilled to launch virtual trips for armchair travelers each first Thursday evening! This month, we travel to the Birmingham Museum of Art in Birmingham, AL.

Founded in 1951, the BMA has one of the finest collections in the Southeast, with 24,000+ paintings, sculptures, prints, drawings, and decorative arts representing diverse cultures from Africa, the Americas, Asia, and Europe, spanning thousands of years to the present. Among other highlights, the Museum’s collection of Asian art, especially Vietnamese ceramics, is considered the finest and most comprehensive in the Southeast. The Museum is also home to a remarkable Kress collection of Renaissance and Baroque art, and its holdings of European decorative arts comprise superior examples of English ceramics (including the largest collection of Wedgwood ceramics outside of England) and 18th-century French furniture.

For this virtual visit Graham Boettcher, the BMA’s R. Hugh Daniel Director, introduces the beautiful building in downtown Birmingham and the museum’s collection. Then, Curator of American Art Kate Crawford discusses Jacob Lawrence: The American Struggle, an exhibition featuring this iconic American modernist’s painting series Struggle… From the History of the American People (1954–1956). The exhibition reunites the multi-paneled work for the first time in more than half a century. One of the greatest narrative artists of the 20th century, Lawrence (1917–2000) painted the Struggle series to show how women and people of color helped shape the founding of our nation. Originally conceived as a series of 60 paintings spanning subjects from the American Revolution to World War I, Struggle was intended to depict, in the artist’s words, “the struggles of a people to create a nation and their attempt to build a democracy.” Lawrence planned to publish his ambitious project in book form; in the end, he completed 30 panels representing historical moments from 1775 through 1817, from Patrick Henry to westward expansion. The panels feature the words and actions of not only early American politicians but also of enslaved people, women, and Native Americans to address the diverse but mutually linked fortunes of all American constituencies engaged in the struggle. Taken as a whole, this remarkable series interprets and expresses the democratic debates that defined early America and still resonate today.