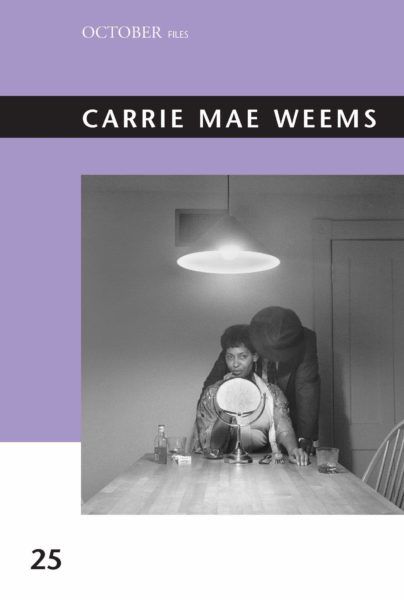 In this October Files volume, essays and interviews from Dawoud Bey, Huey Copeland, Kimberly Drew, Coco Fusco, Thelma Golden, and Deborah Willis, among others, explore the work of the influential American artist Carrie Mae Weems—her invention and originality, the formal dimensions of her practice, and her importance to the history of photography and contemporary art. Since the 1980s, Weems has challenged the status of the Black female body within the complex social fabric of American society. Her photographic work, film, and performance investigate spaces that range from the American kitchen table to the 19th-century world of historically Black Hampton University to the ancient landscapes of Rome. These texts consider the underpinnings of photographic history in Weems’s work, focusing on such early works as The Kitchen Table series; Weems’s engagement with photographic archives, historical spaces, and the conceptual legacy of art history; and the relationship between her work and its institutional venues. The book makes clear not only the importance of Weems’s work but also the necessity for an expanded set of concerns in contemporary art—one in which race does not restrict a discussion of aesthetics, as it has in the past, robbing Black artists of a full consideration of their work.