Home > Events > In Conversation: From Talking Leaves to Pixels – VIRTUAL 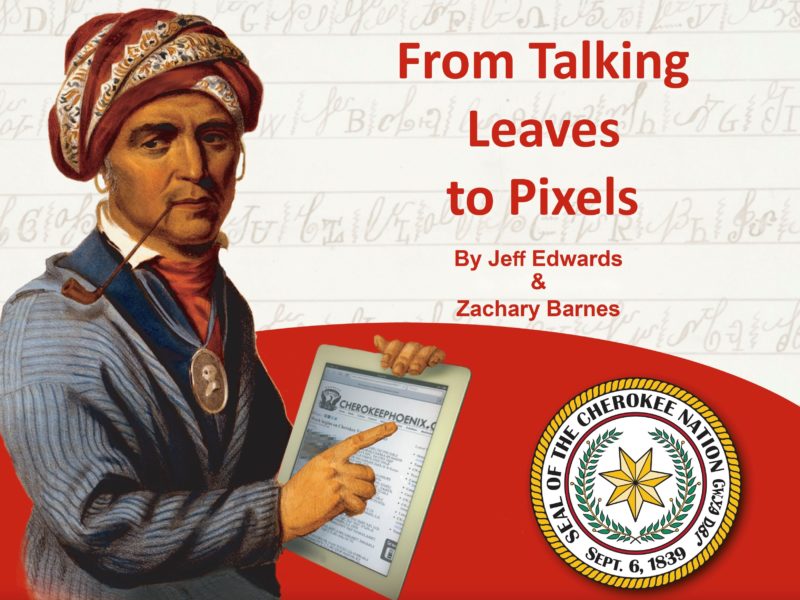 In Conversation: From Talking Leaves to Pixels – VIRTUAL

Join artist Jeff Edwards and language technologist Zachary Barnes for an illustrated talk chronicling the Cherokee writing system—known as the syllabary—from its creation, adoption by the tribe in the early 1820s, adaptation to the printing press in the late 1820s, and how it evolved with technology through the next two centuries. The Cherokee people were always quick to adopt the latest technology of the time and utilized technology with the syllabary to communicate, document, and preserve the Cherokee language.

Zachary Barnes is a language technology assistant with the Cherokee Nation Language Department. He has worked with the language technology program for nine years across various projects. He graduated from Northeastern State University in 2014 with an undergraduate degree in Cherokee cultural studies.

Jeff Edwards is an award-winning Cherokee graphic artist who has worked for the Cherokee Nation for over 20 years. He is a language activist that has worked on numerous projects that have projected the Cherokee language into the global spotlight. He holds degrees in liberal arts from Haskell Indian Nations University in Lawrence, KS and in graphic design from Northeastern State University in Tahlequah, OK. His artwork is almost exclusively Cherokee-themed. He prefers using the Cherokee syllabary—rather than English—to promote the Cherokee language. He likes expressing old cultural concepts with modern electronic tools.