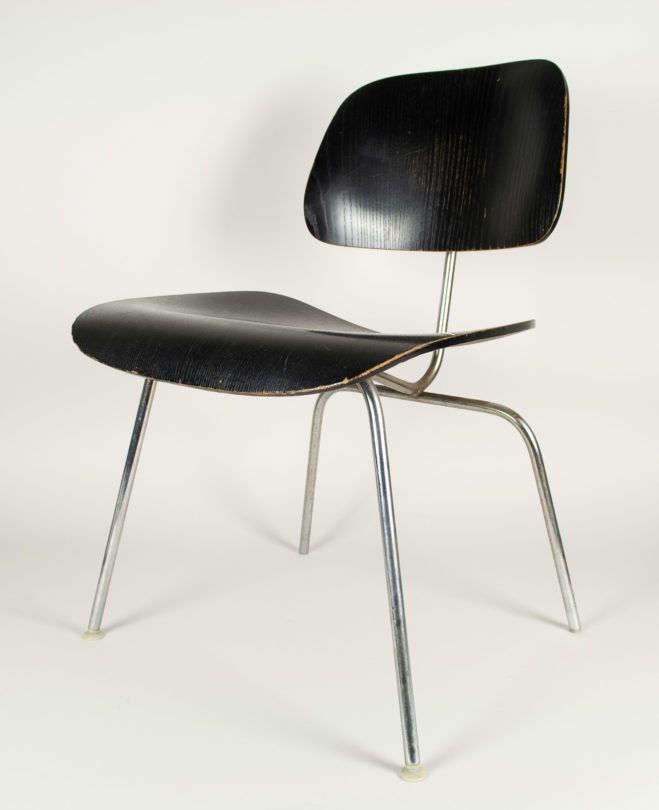 This chair has made its way home, so to speak. Originally purchased new for Pack Memorial Library in the late 1950s, the Eames molded plywood dining chair was used on the third floor of the library located at 2 South Pack Square, then the North Carolina Room, now the Asheville Art Museum’s Studio in the John & Robyn Horn Education Center (see image below the chair).

Designed by Charles Eames (St. Louis, MO 1907–1978 St. Louis, MO) and Ray Eames (Sacramento, CA 1912–1988 Los Angeles, CA) after some years of experimentation with molding plywood, the Dining Chair Metal (DCM) has become an icon of modern design. The couple tested making furniture and useful objects out of plywood by shaping it under heat and pressure. The process became a success when Charles joined the US Navy at the beginning of World War II and made molded plywood splints and stretchers for use during the war. When Charles returned to California, the Eameses focused that same technology on making high-quality, affordable furniture. The molding process meant the furniture (chairs, tables, and screens) could be mass-produced and therefore sold for less. The construction of this chair is based on a 1940 design by Charles Eames and Eero Saarinen, but when Charles and Ray were hired by the director of the Herman Miller furniture company—George Nelson, a noted mid-century designer himself—in 1946, they altered the design to include shock mounts where the chrome brace connected to the plywood. Their Plywood Group of furniture was produced in California from 1946 to 1947 and then in Zeeland, MI, where these chairs are still made today. The Eames molded plywood chair was named the “Design of the Century” in 2001.

When the library moved from Pack Square to its current location at 67 Haywood Street in 1978, the Eames chairs went too. Only just recently did the library (specifically the Buncombe County Special Collections Library) and the Museum get in touch and bring one of these chairs back into the space it had originally been purchased for: Pack Memorial Library, now the Asheville Art Museum. The Eames (Dining Chair Metal) DCM brings a little bit of the building’s history back to life, and as part of the Museum’s Collection it continues to tell the story of art and design of the 20th and 21st centuries.

Find this chair on view in Modernist Design at Black Mountain College October 22, 2021 through January 24, 2022.