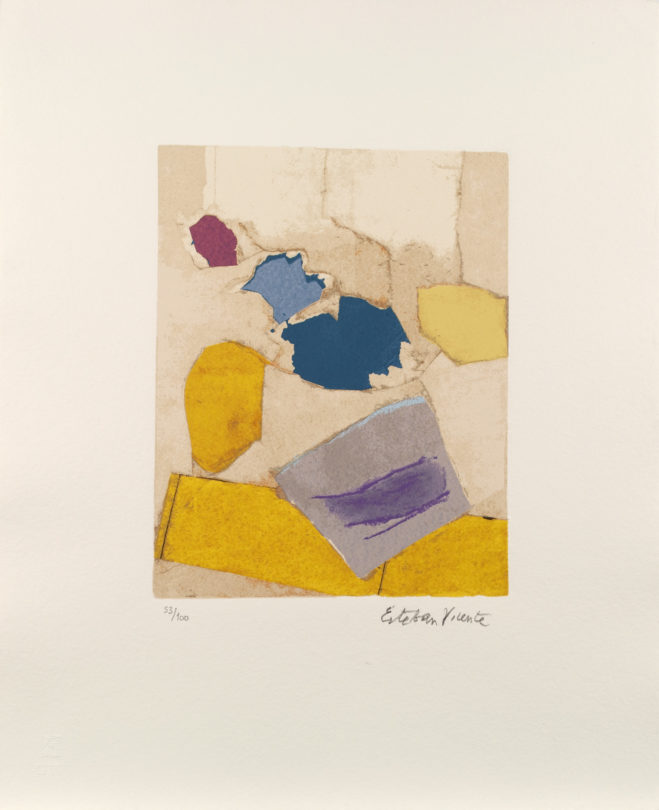 The A mis soledades voy, de mis soledades vengo portfolio, created at the end of artist Esteban Vicente’s life, demonstrates the lasting influence of interdisciplinary ideas upon individuals associated with Black Mountain College. The title, taken from a poem by Lope de Vega, translates to “I go to my loneliness, I come from loneliness,” and the texts that accompany the images include excerpts from writers of the golden age of Spanish literature, including Calderon and Cervantes. The screenprints are based on eight original collages, translated to the print medium.

This portfolio joins several others in the Collection that combine poetry and prose with art, including Nancy Graves’s Tango portfolio, Robert Motherwell’s Octavia Paz Suite, and John Urbain’s Images: Poems & Watercolors portfolio. The prints also exhibit the expressive use of color and shape that speaks to a lifelong career of exploring abstraction.

Within the first generation of Abstract Expressionists, Esteban Vicente was a member of the most influential circles of artists. During the course of his long and lauded career, he closely studied shape, light, and the possibilities of pigment. The artist completed his studies at the Real Academia de Bellas Artes in Madrid, Spain in 1924. In 1936, Vicente escaped the Spanish Civil War, moved to New York, NY, and then to Philadelphia, PA. Despite this departure from his country of birth, a museum dedicated to his life and work can be found in Segovia, Spain. By the late 1940s, Vicente was committed to exploring abstraction, giving up his earlier representational style of painting. In the 1950s Vicente explored collage, integrating the analytical Cubism of Pablo Picasso, Georges Braque, and Juan Gris into works that were highly animated.

Vicente taught at the legendary Black Mountain College in Black Mountain, NC, in the summer of 1953 alongside Joseph Fiore and Peter Voulkos, and by all accounts, had a lasting impact on his students’ careers, including artists such as Dorothea Rockburne. He also taught at other prestigious institutions, such as the New York Studio School of Drawing, Painting, and Sculpture and the University of California Berkeley. Later in that decade, Vicente fully embraced the tenets of Abstract Expressionism. Vicente was close to many of his famous contemporaries, including Willem de Kooning (with whom he shared a studio), Elaine de Kooning, Jackson Pollock, Mark Rothko, Franz Kline, Barnett Newman, and Ad Reinhardt. From the 1960s to the end of his career, Vicente explored a mode of expression that integrated abstraction, movement, and color.