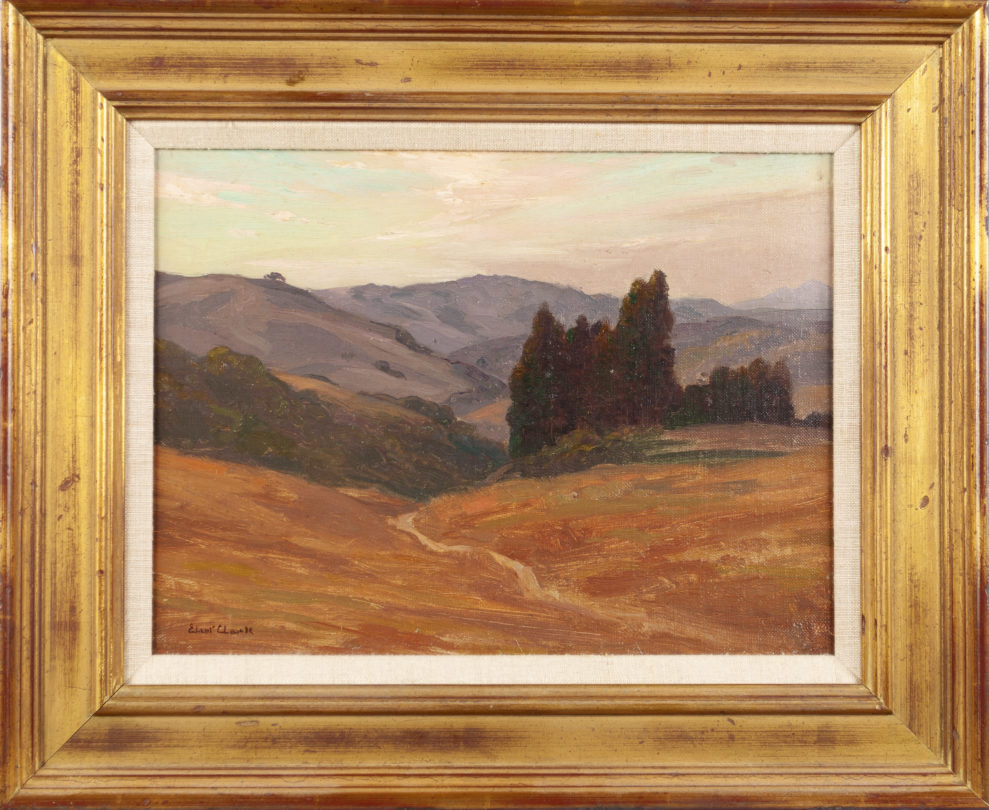 The Asheville Art Museum is pleased to welcome The Hills Beyond Santa Barbara #IV by artist Eliot Candee Clark to the Collection. This serene early 20th-centry oil painting was gifted to the Museum by Mr. And Mrs. Leroy Cook. Clark (New York, NY 1883—1980 Charlottesville, VA) was an American impressionist painter known for his landscapes, particularly harbor views and mountain scapes. Son of the prominent Tonalist landscape painter Walter Clark, Eliot Clark came of age in his father’s New York studio surrounded by some of the foremost artists of his time, including John Twachtman, Edward Potthast, Joseph De Camp, and Frank Duveneck.

The artist travelled extensively throughout the United States during his career, and it is known that he visited both the Grand Canyon and Santa Barbara, CA while teaching at the Art Students League, from 1919 to 1922, and in 1923 he camped in Santa Barbara to paint en plein air in an endeavor to achieve the best atmospheric perspective. The Hills Beyond Santa Barbara #IV demonstrates an attention to color of remarkable quality, particularly in the rendering of the sky and the shadows of the hills.

Earlier in his career Clark studied at the Art Students League in New York and made travels to Europe in 1904. He did not enroll at one of the academies, but instead traveled extensively on his own, observing works in museums and painting en plein air at various sites favored by the Barbizon artists. Arriving in London in 1905, he made a special point of viewing a memorial exhibition of the works of James Abbott McNeill Whistler at the New Gallery. These influences are evident in this particular painting.

Clark was a member of the American Watercolor Society and served as its president from 1920 to 1923. Clark also served as president of the National Academy of Design in New York City from 1956 to 1959. In addition, Clark worked extensively as a writer and art historian. With ties to the Southeast region in particular, Clark received invitations to serve as the annual visiting instructor at the Savannah Art Club in Georgia in 1924 and 1925, exhibited at the Telfair Academy in Savannah, GA, taught summer school courses in Charlottesville, VA in 1933, and later in life resided in Virginia.