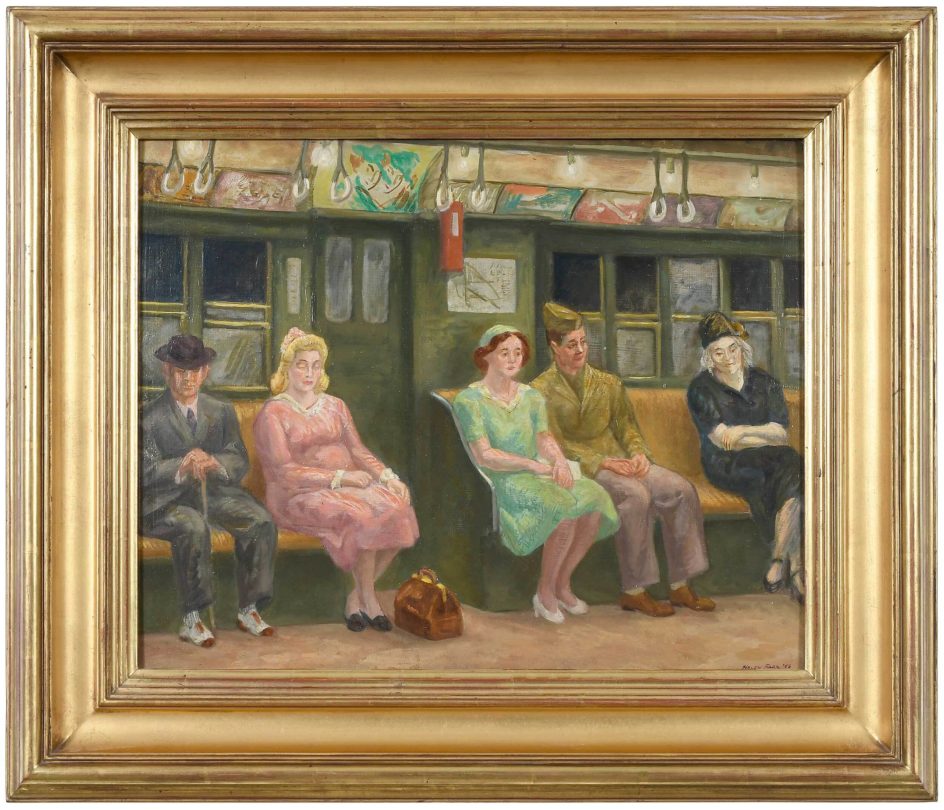 The Asheville Art Museum is pleased to announce that the 1945 painting Underground by Helen Farr Sloan (New York, NY 1911–2005 Wilmington, DE) has recently entered the Collection. Created just one year after Farr Sloan’s marriage to fellow artist John Sloan (Lock Haven, PA 1871–1951 Hanover, NH), this artwork demonstrates her characteristic embrace of the subjects and styles of the American Scene Painting movement. Beginning in the era of the Great Depression, the movement carried on for several decades in which artists continued in a representational mode of artmaking, rather than exploring the concurrently popular mode of modernist abstraction in American art at that same period.

Farr Sloan’s Urban Realist subjects under the branch of American Scene Painting included the sights of New York, NY. Underground depicts five seated figures on a New York City subway viewed from the perspective of a traveler seated opposite. At center, a man dressed in military attire emphasizes the year in which the work was created at the close of World War II. Whether companions or strangers, the individuals in the painting share a calm, stolid expression on their journey.

Born in New York, NY in 1911, Farr Sloan established a career as a painter, printmaker, illustrator, and writer. Farr Sloan studied anatomy briefly at Cornell University, but despite her family’s wishes for her to pursue a medical career, turned her path toward art. She studied at the Crafts Student League in weaving, pottery, metalwork, woodcarving, and jewelry making. The artist enrolled at the Art Students League in 1927 at the age of 16, and became a student of John Sloan, as well as Harry Wickey, Charles Locke, and Boardman Robinson. Sloan was a leader of the Ashcan School, a student of American artist Robert Henri, and an art teacher himself. In 1930, Farr Sloan spent the first of several summers in Santa Fe, NM with Sloan and his first wife, Dolly, and later became the artist’s assistant. Following the death of Dolly, John and Helen married in 1944. She continued to paint, creating the majority of her work in the 30s and 40s, and she collaborated with husband in their creative endeavors. Following Sloan’s death in 1951, Farr Sloan went on to design theatre sets, teach, and chair the art department at Nightingale-Bamford School for Girls in New York City.

Helen Farr Sloan dedicated the later years of her life to promoting of work of John Sloan. Her painting joins four works on paper by her husband in the Collection.