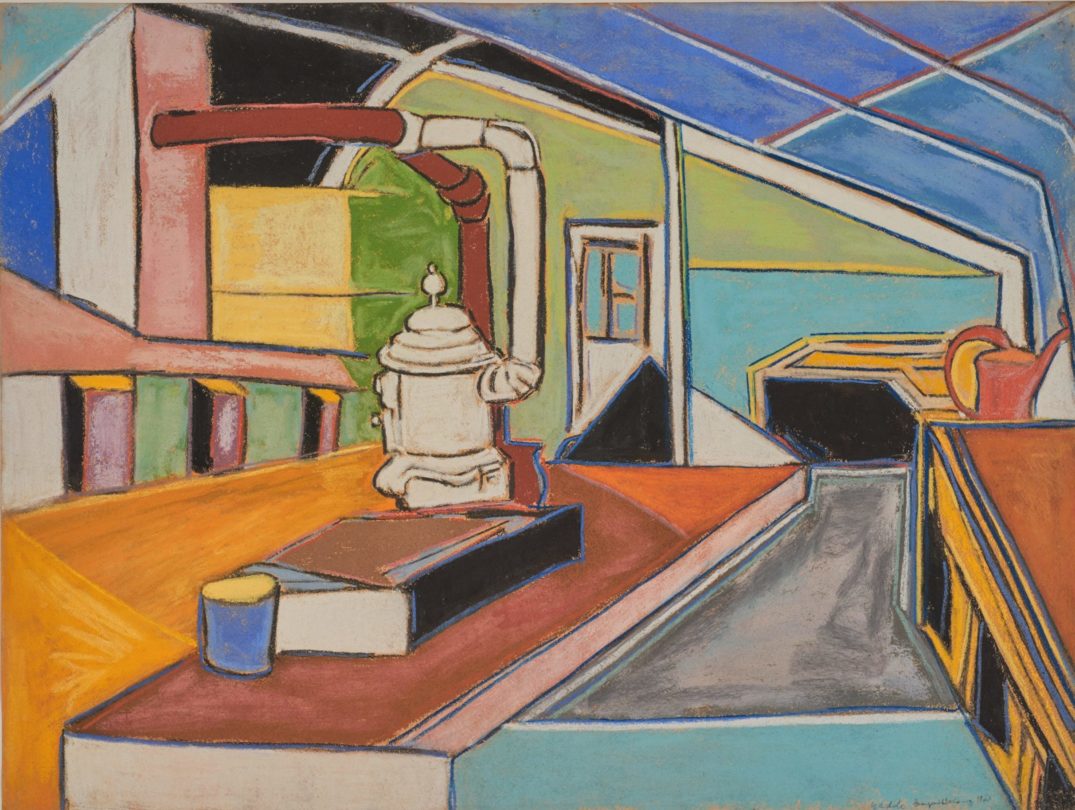 Exhibition from Knoxville Museum of Art set to open April 2, 2021

Asheville, N.C.—Featuring more than 40 paintings and works on paper, Beauford Delaney’s Metamorphosis into Freedom examines the career evolution of modern painter Beauford Delaney (Knoxville, TN 1901–1979 Paris, France) within the context of his 38-year friendship with writer James Baldwin (New York 1924-1987 Saint-Paul-de-Vence, France). The exhibition will be on view in the Asheville Art Museum’s Explore Asheville Exhibition Hall April 2 through June 21, 2021.

The works in this exhibition bring into special focus Delaney’s experiments with abstraction sparked by the artist’s 1955 move to the Paris suburb of Clamart, as well as the ways that the artist and Baldwin’s ongoing intellectual exchange shaped one another’s creative output and worldview from their first meeting in 1940 until Delaney’s death in 1979.

Metamorphosis into Freedom also calls attention to Baldwin’s role as “witness” to the painter’s evolution, which he deemed “one of the most extraordinary personal and artistic journeys of our time.” Baldwin found in Delaney a father figure, muse, and model of perseverance as a gay man of color, who opened for him the transformative possibility that a Black man could become an artist. Delaney found in Baldwin a powerful intellectual and spiritual anchor who inspired some of his finest works and who provided vital emotional support and creative validation.

“The Asheville Art Museum is excited to partner with the Knoxville Museum of Art to bring Beauford Delaney’s work this side of the Blue Ridge Mountains,” says Hilary Schroeder, assistant curator at the Asheville Art Museum. “An Appalachian-born artist, Delaney’s portraits, landscapes, and abstractions offer an important view into his experiences in both the region and abroad. Combined with materials related to his friendship with James Baldwin, Metamorphosis into Freedom presents visitors with a unique opportunity to journey through Delaney’s rich and deeply thoughtful career accentuated by materials from his sketchbooks and other ephemera.”

The wealth of powerfully vibrant works of art that Delaney produced during his fifty-year career is nothing less than a remarkable and unlikely triumph. Seemingly at every turn, he faced daunting obstacles in the surrounding environment and from within his own psyche. Although gregarious and charismatic, Delaney left behind journals and letters that afford insight into an already well-documented battle with mental illness, depression, poverty, marginalization, and loneliness. As Baldwin once observed, Delaney “has been starving and working all his life . . . He has been menaced more than any other man I know by his social circumstances and also by all the emotional and psychological stratagems he has been forced to use to survive; and more than any other man I know, he has transcended both the inner and the outer darkness.” His artistic practice provided a steadying influence and a lifelong source of intellectual engagement and creative experimentation. To Delaney, art was an act of love and faith capable of revealing inner truths and offering entry into a world of illumination. Over the course of his career, Delaney made a winding journey through artistic territory whose technical borders and stylistic intersections have only begun to be examined and documented. The broad expressive range the painter navigated reflects his boundless creative drive and tireless pursuit of lofty and far-reaching artistic goals.

Designed to underscore the powerful presence of Baldwin in Delaney’s life, Metamorphosis into Freedom includes more than 40 works by the painter that depict Baldwin, were inspired by or dedicated to Baldwin, illustrate key turning points in Delaney’s development as described in Baldwin’s writings, or document key places and events where their ongoing dialogue unfolded. The exhibition focuses special attention to a chapter in Delaney’s studio practice in which he intensified experiments with abstraction after moving to the Paris suburb of Clamart in late 1955. The relatively quiet suburban surroundings of his new studio sparked Delaney’s pursuit of representing light in bold abstractions in which references to the physical world appear incinerated. Baldwin witnessed this exciting new development and considered Delaney’s Clamart abstractions as representing the pinnacle of his artistic achievement, and the fullest realization of his lifelong search to express metaphysical concepts of light and movement. In an essay for a 1964 show at Galerie Lambert, Baldwin noted Delaney’s extraordinary painted light was such that it “held the power to illuminate, even to redeem and reconcile and heal.”

Beauford Delaney’s Metamorphosis into Freedom is organized by the Knoxville Museum of Art, which owns the largest and most comprehensive public collection of Beauford Delaney’s art. Fore more information, visit ashevilleart.org.

This exhibition is the result of an exhibition exchange between the Asheville Art Museum and the Knoxville Museum of Art, born in response to the impact of COVID-19 but hopefully the first of future collaborations of its kind that celebrate the holdings of regional institutions. The Knoxville Museum of Art, who organized Metamorphosis into Freedom, has in turn presented A Lasting Imprint: Rendering Rhythm and Motion at Black Mountain College, organized by the Asheville Art Museum.

During his youth, Beauford Delaney’s precocious talent was recognized by Lloyd Branson (1853–1925), Knoxville’s first full-time professional artist, who as Delaney’s mentor explained that all painting should be studies in light. It was a lesson Delaney increasingly took to heart as his studio practice and creative vision took shape years later. Branson, recognizing that African Americans had little chance of pursuing careers in the segregated South, helped send Delaney to Boston for professional training. Soon after settling in New York in 1929, Delaney attracted a distinguished circle of cultural luminaries including Georgia O’Keeffe, Henry Miller, and Willem de Kooning, yet enjoyed little commercial success.

James Baldwin entered Delaney’s world at age 15, and from the beginning the two recognized in each other kindred spirits, sojourners along a difficult road whose personal circumstances were strikingly similar. Baldwin considered Delaney a “spiritual father,” as he once described, to whom “I owe a debt that can never be repaid,” and credited the artist as the individual most responsible for broadening his creative vision. Baldwin, in turn, inspired Delaney with his fearless social conscience and commitment to civil rights causes. The painter produced more than a dozen works depicting Baldwin or inspired by him, and the writer dedicated several novels and essays to his mentor. Baldwin wrote eloquently about Delaney and his art, noting essential qualities in the artist and musing on the implications of significant changes in his work. His vivid prose and detailed observations offer a uniquely informed and articulate perspective on key developments in the painter’s evolving studio practice.

Both Delaney and Baldwin embraced transnational identities and, in their work, sought to reveal truths beneath surface appearances. Delaney in his portraits, for example, employed vibrant color and expressive brushwork in a way that increasingly sacrificed superficial physical qualities in order to project what he considered the more important and essential spiritual identity of the sitter. Baldwin regarded America’s social woes as the product of systemic myths that caused citizens to view themselves and each other as if through a distorted lens, and credited Delaney for teaching him “to see, and to trust what I saw.” In many cases, ordinary daily observations—reflections in puddles in the streets of Greenwich Village or the quality of light filtered through window—sparked extraordinary creative exchanges between the two that informed their individual production.