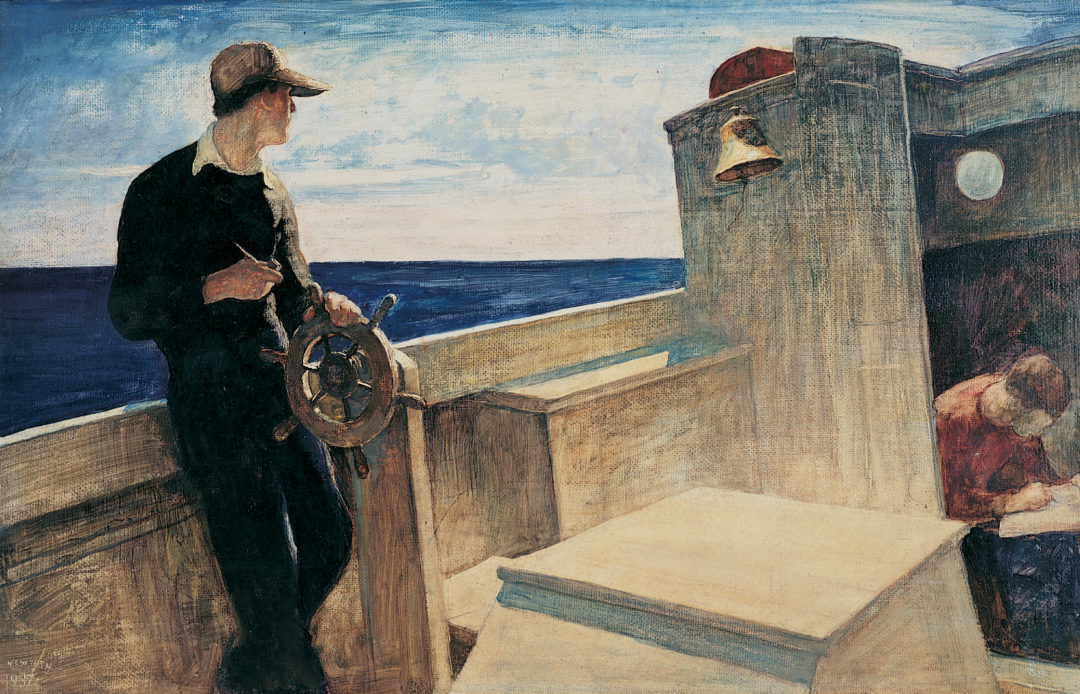 Asheville, NC—The Wyeths: Three Generations | Works from the Bank of America Collection provides a comprehensive survey of works by N. C. Wyeth, one of America’s finest illustrators; his son, Andrew, an important realist painter; his eldest daughter, Henriette, a realist painter; and Andrew’s son Jamie, a popular portraitist. Through the works of these artists from three generations of the Wyeth family, themes of American history, artistic techniques, and creative achievements can be explored. This exhibition will be on view in the Asheville Art Museum’s Explore Asheville Exhibition Hall February 12 through May 30, 2022.

N. C. Wyeth (1882–1945) has long been considered one of the nation’s leading illustrators. In the early 1900s, he studied with illustrator Howard Pyle in Delaware. In 1911, he built a house and studio in nearby Chadds Ford, PA. Later, he bought a sea captain’s house in Maine and in 1931 built a small studio, which he shared with his son, Andrew, and his daughters, Henriette and Carolyn. The exhibition includes illustrations for books by Robert Louis Stevenson and Washington Irving as well as historical scenes, seascapes, and landscapes.

Andrew Wyeth (1917–2009) is one of the United States’ most popular artists, and his paintings follow the American Realist tradition. He was influenced by the works of Winslow Homer, whose watercolor technique he admired, as well as by the art of Howard Pyle and his father, N. C. While Andrew painted recognizable images, his use of line and space often imbue his works with an underlying abstract quality. The exhibition includes important works from the 1970s and 1980s as well as recent paintings.

Henriette Wyeth (1907–1997) was the eldest daughter of N.C. Wyeth and an older sister to Andrew Wyeth. Like other members of her family, her painting style was realist in a time when Impressionism and Abstraction were popular in the early 20th century. She studied painting at the Pennsylvania Academy of the Fine Arts and was an acclaimed portraitist, though perhaps not as widely known as her father and brother. Most notably she painted the portrait of First Lady, Pat Nixon, which is in the collection of The White House.

Jamie Wyeth (born 1946), like his father and grandfather, paints subjects of everyday life, in particular the landscapes, animals, and people of Pennsylvania and Maine. In contrast to his father—who painted with watercolor, drybrush, and tempera—Jamie works in oil and mixed media, creating lush painterly surfaces. The 18 paintings in the exhibition represent all periods of his career.

This exhibition has been loaned through the Bank of America Art in our Communities® program.

This is a ticketed exhibition. Learn more at ashevilleart.org.