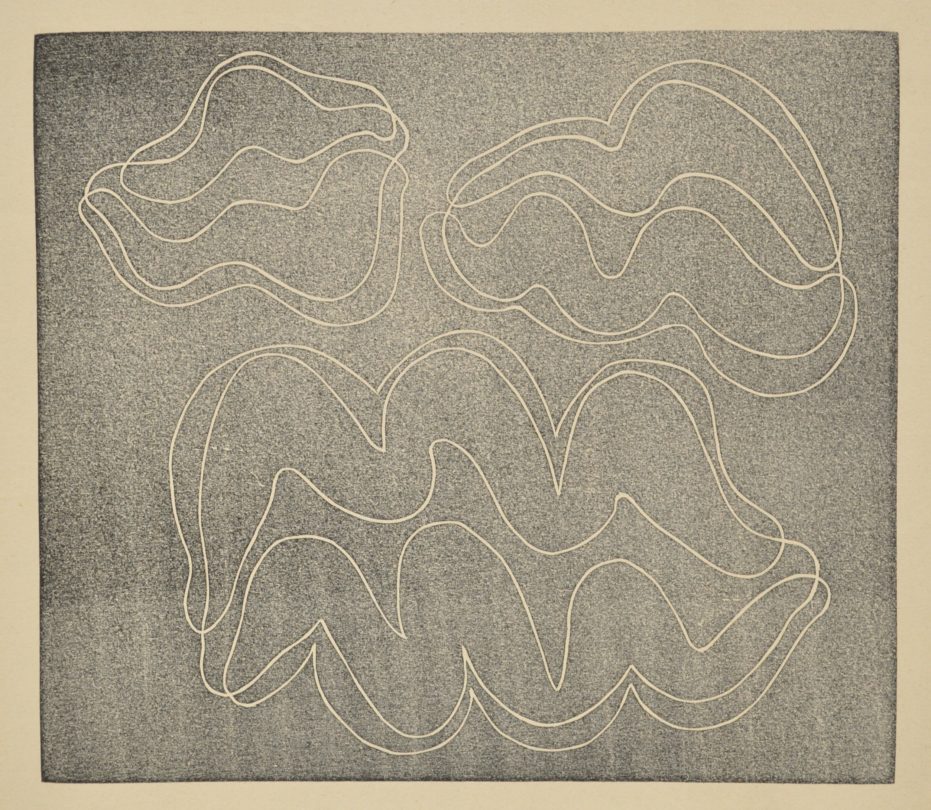 The Asheville Art Museum is grateful for the contributions from Rick & Maggi Swanson, Kathy Dambach, and Charles & Jennifer Riner for the purchase of Adapted, a woodcut on paper by Josef Albers created in 1944 during his time at Black Mountain College (BMC) in North Carolina. This woodcut was printed at Biltmore Press in Asheville. Best known for his later geometric patterns involving straight lines, this early work by Albers shows him playing with curvilinear lines and organic forms.

The Museum is fortunate to hold editions of Josef Albers’s Multiplex B and Multiplex C, both made while he was teaching at BMC and printed at Biltmore Press in 1948. The Museum also has in its Collection the Formulation : Articulation portfolios, which demonstrate Albers’s pursuit of ideas he began exploring at BMC, as well as his career-long study of the square form and the interaction of color. Adapted is the earliest work by Albers currently in the Collection. The organic forms printed in black ink in Adapted offer a contrast to the structured geometry of the similarly printed Multiplex works, and offer an opportunity to compare and contrast the progression of the Artist’s work while teaching at BMC and in the period beyond.

Josef Albers was born in Bottrop, Germany, in 1888. In 1905 he enrolled in a seminary and began teaching elementary school in 1908. He created his first abstract painting in 1913 while enrolled at the Royal Art School in Berlin. He produced his first lithographs and woodcuts at the School of the Applied Arts in Essen. In 1920 Albers gave up his position as a teacher in order to become a student at the Bauhaus in Weimar. After taking preliminary courses, Albers began to make “glass pictures” by fusing colorful glass together into geometric patterns. On the strength of his glass work, he was asked to organize the glass workshop. Within three years Albers became a member of the faculty at the Bauhaus, and between 1928 and 1929 he was the head of the furniture workshop at its location in Dessau. When the Bauhaus moved to Berlin in 1932, Albers was placed in charge of the preliminary courses. Twenty of his glass pictures were included in the Exhibition of Bauhaus Masters of 1929. In 1933 the Bauhaus was closed by the Nazis and, on the recommendation of Philip Johnson at the Museum of Modern Art, Albers was hired to head the art department at BMC. He and his wife Anni Albers served as faculty at BMC until 1949. Josef Albers was named Director of the Department of Design at Yale University in 1950, where he remained until retirement. Albers was noted as an important teacher, artist, and color theorist. His book Interaction of Color was published in 1963 and is still used in college art classes around the world.