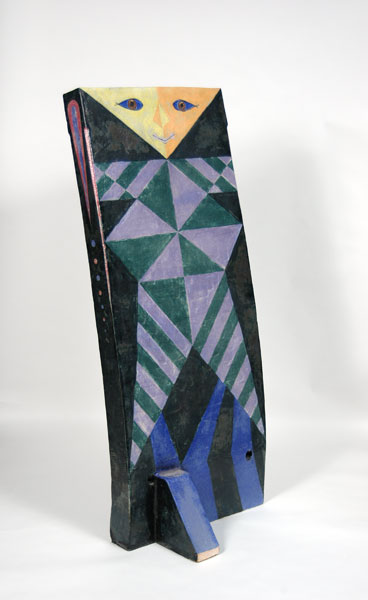 One of the driving forces of Norm Schulman’s work was looking for the duality in human nature. He fearlessly confronted life through his ceramics. Like others in his Arlecchino (Harlequin in Italian) series, this work is two-sided, directly referencing that duality. Schulman is known for creating functional ware but at times would abandon traditionally functional shapes to explore the slab form and painted surfaces, as seen in Arlecchino and Jester. Schulman played a vital role in the creation of ceramic and glass studio arts at the Toledo Museum of Art, the Rhode Island School of Design, and Penland School of Craft.

Lines, angles, shapes, color, hard edge, and one long sleek curve are a few of the elements of design used in this sculpture created by Schulman. The triangular face—particularly the blue and brown eyes—drew me first to the top of this englobe painted, glazed stoneware. The use of angles begins here, but they also pervade this artwork that is much taller than wide. Schulman initiates his interesting use of color on the face with two tones and added a small triangular nose within the opposing colors.

Moving vertically downward, Schulman applies two color—light purple and dark green—to primitively form the body with straight lines only. The body indicates the presence of arms that appear at right angles to the head but are not complete. A torso is in the shape of a rhombus, with every other triangle in the two colors. The legs that protrude from the torso are two more triangles which are elongated triangles ending in points with no feet or toes. Schulman uses negative space effectively. The black areas form triangles of varied sizes. I mentioned one long sleek curve and at just over four feet, the artwork forms one ten- to twenty-degree curve. Another figure, also formed with triangles in two colors, occupies the backside. Balance is another element Schulman uses as he created a stand that subtly jutes out from the base of the artwork. Another figure, also formed with triangles in two colors, occupies the backside. Enjoy looking closely at this whimsical artwork. What do you see?

This artwork is on view in Fantastical Forms: Ceramics as Sculpture through April 5, 2021.