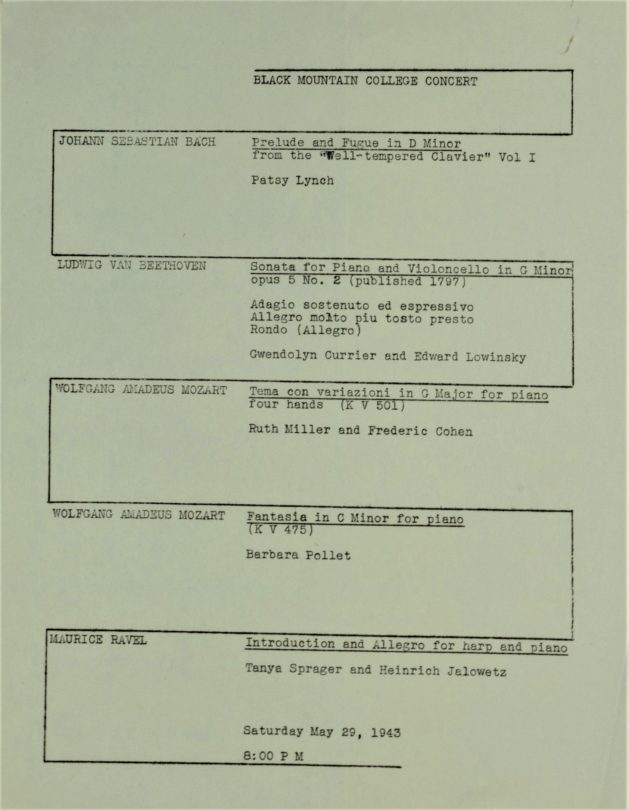 Black Mountain College (BMC) attracted many globally known musicians to teach and attend the Music Institutes that occurred during several summer sessions. This poster shares a typical concert program hosted by the College, showcasing music by some of the greats—Bach, Beethoven, Mozart, and Ravel.

Highlights from the Music Institutes include several notable individuals. Patsy Lynch attended BMC for six years and graduated with a degree in Music. She worked extensively with her mentor, Austrian composer Heinrich Jalowetz, and performed with him regularly in the weekly Dining Hall performances. Lynch’s name can be seen in many of the weekly College bulletins for piano performances. Jalowetz taught music at BMC from 1939 to 1946. Along with many other faculty members, Jalowetz emigrated to the United States during Hitler’s rise to power. Much like Josef Albers, who brought along the principles of the Bauhaus, Jalowetz introduced to the curriculum the ideals of the Second Viennese School. He later organized the Music Institutes at BMC.

This archival document, and many others, have been digitized and shared in our Online Collection Database. This digitization project is supported in part by North Carolina Humanities, the state affiliate of the National Endowment for the Humanities.