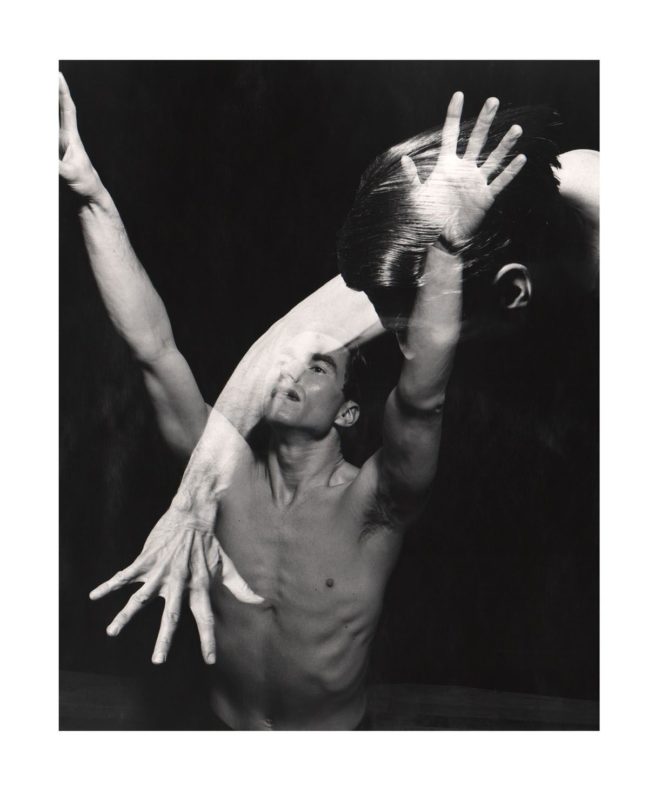 Barbara Morgan is best known for her depictions of modern dancers. She was also the co-founder of the well-known photography magazine, Aperture. Morgan moved to New York City in 1930 and it was there that she was introduced to the “Mother of Modern Dance,” Martha Graham, and her dance company. Inspiration struck as she observed the movement of the dancers on the dramatically lit stage. Morgan is known in the visual art and dance worlds for insightful studies of American modern dancers such as Martha Graham, Merce Cunningham, Erick Hawkins, José Limón, Doris Humphrey, and Charles Weidman.

Erick Hawkins—Reaching was particularly magnetic for me mostly because of Morgan’s photo techniques. Photomontage is the process and the result of making a composite photograph by cutting, gluing, rearranging and overlapping two or more photographs into a new image. The process is more experimental, playful, and often contains surreal or spectral results. In this work, Morgan merges the two images of dancer Erick Hawkins daringly and unexpectedly. The movement of the hands elevates the reference to dance and motion as she defies the flat plane. The work is less of a still image instead resembling more of a video clip. For me, viewing the work in the gallery becomes a visceral experience—I can feel the buzz of the air whipping around me, the breath of the dancer vibrating in the room, sweat glistening off Hawkins’s body and dripping onto the floor, and my eyes adjusting to the contrast of the darkness and the stage lights. The photograph is alive, and I am a front-row member of the audience.