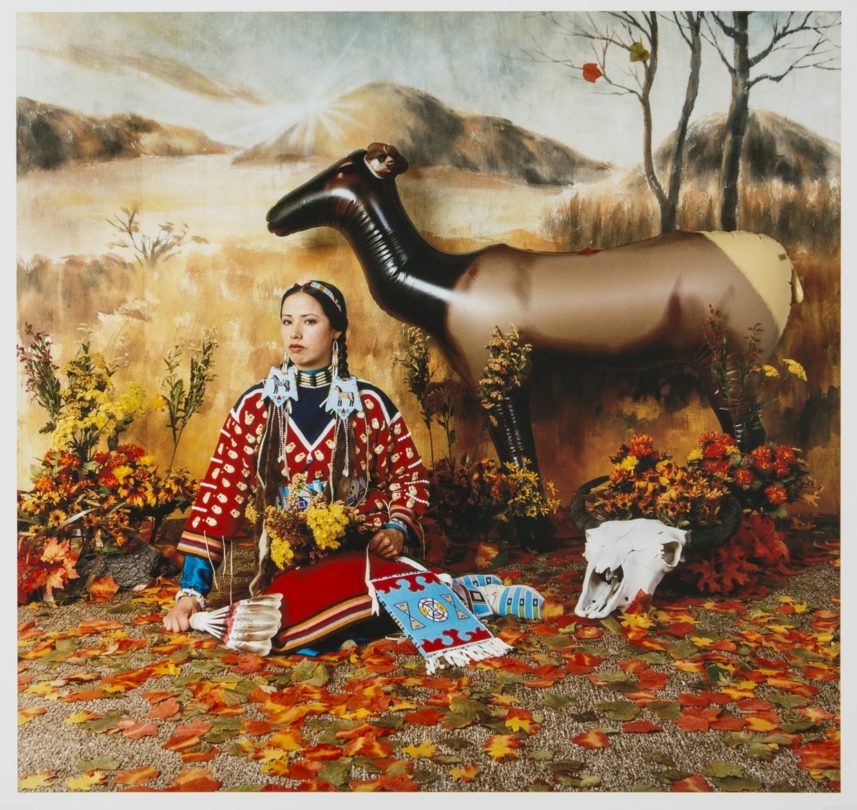 Raised on the Apsáalooke reservation in Montana, Wendy Red Star’s work is directly inspired by her culture. Like all of her work, the Four Seasons series challenges mainstream portrayals of American Indians. Winter, Spring, Summer, and Fall feature dioramas that incorporate different textures and materials. Red Star poses in front of printed backdrops, surrounded by faux scenery of the season composed of animal cutouts, fake birds and leaves, and even an inflatable deer. These images serve as a parody of a display one might encounter in a natural history museum, and are a direct reflection of the humorous and ironic, yet critical lens with which Red Star sees the world.

Red Star actively works against the stereotype of the “noble savage”—the silent and stoic portrayal of Indigenous people that has become so popular in US media. While harmful and inaccurate representations of American Indians are abundant, Red Star focuses on the inclusion of Indigenous people in contemporary art discourse through Native voices. Her work highlights the importance of creating a space for Native women in the art world by showcasing her intersecting Indigenous female perspective.

Red Star maintains a prominent presence in the Indigenous feminist movement, and is the creator of the hashtag #ApsaalookeFeminist. The Apsáalooke are a matrilineal society, and the artist draws inspiration from her grandmother, who taught her about sewing and crafting traditional regalia. Red Star continues this tradition by sharing her work, history, and culture with her daughter, Beatrice, who can be seen in some of her photographic works.

Works like the Four Seasons series actively combat the idea that Native people exist only in history or fiction. While it isn’t her intent to create political work, Red Star believes that as a brown person, her art will always be political whether she wants it to be or not, solely because it contradicts the colonial standards that pervade.