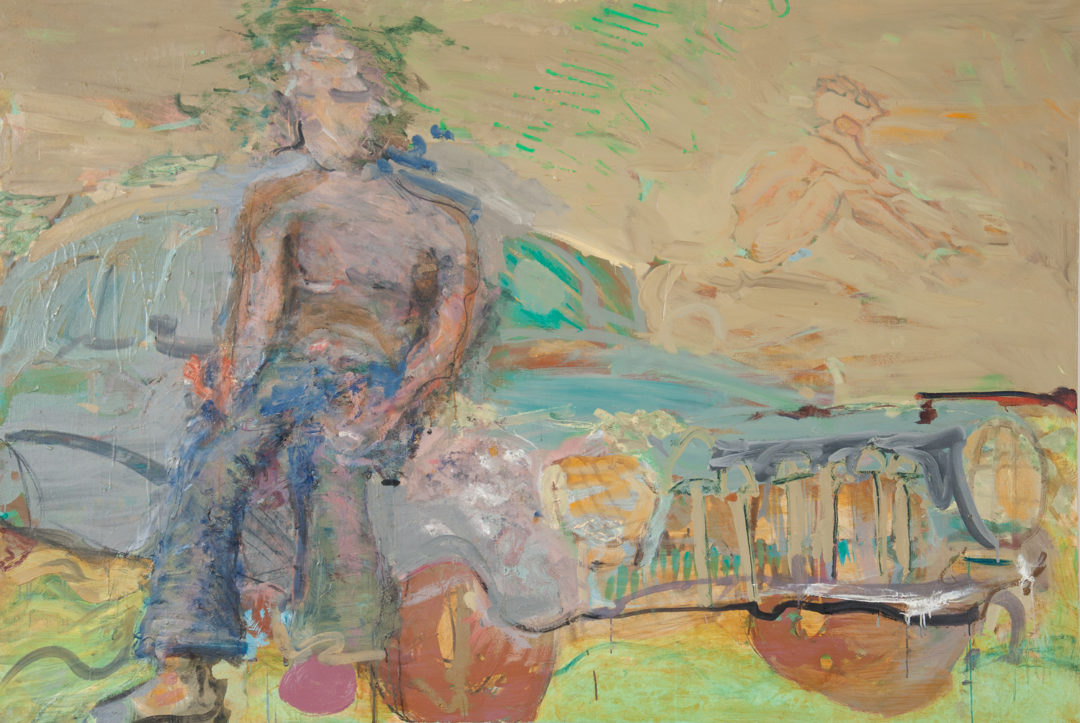 Tom Field was a student at Black Mountain College from 1953 to 1956, and active in the Abstract Expressionist and San Francisco Renaissance circles from the 1950s to the 1980s. His lifelong friend Paul Alexander, another artist in our Black Mountain College Collection, considered Field overlooked and underappreciated. Peers and critics agreed. However, he was popular in the few exhibitions he was featured in, winning top prize at the San Francisco Museum of Modern Art Annual in 1962. Nevertheless, Field’s penchant for alcohol and utter disregard for self-promotion resulted in him never receiving the long-term critical acclaim awarded to many of his peers such as Robert Motherwell, Franz Kline, and Jackson Pollock.

At first glance, Tom Field’s Frank and Chevy seems messy, unfinished, and sketch-like. The man has no face, the car is roughly painted, and the sky is literally brown. However, upon closer examination, the painting comes to life. Although Frank’s face is a mere gesture, it emanates a sort of tired calmness. His blue pants—maybe jeans—are worn thin and his shirt is long gone on this presumably hot day. Maybe he was working on his Chevy, the grey line in his right hand a suggestion of a wrench or some other metal tool.

In true Abstract Expressionist form, Field renders the environment of Frank and Chevy with gestural brushstrokes, forcing the paint to form layers that drag the subjects away from realism. Seemingly haphazard but undoubtedly planned, elements like the grill of the car are articulated through calligraphic brushstrokes, pulses of color blended right on the canvas, and textural dripped and scratched paint. The car’s headlights are represented by rudimentary patterns slashed onto the canvas, while other objects, like the back windows, demonstrate an almost architectural understanding of space and perspective. In addition to its Abstract Expressionist roots, the work weaves in unique elements that defy classification. For instance, a nude figure floats surreally in the sandy sky, perhaps symbolizing Frank’s daydreams as he rests atop his vehicle. Perhaps the figure is a self-portrait of Field, or even a mere sketch he decided to leave on the canvas to conserve materials. Field was often financially insecure and painted with inexpensive supplies.

I’ve become a bit obsessed with this painting. The longer I look, the more I notice. Despite Field’s lack of commercial success, elements of brilliance are present in Frank and Chevy. The techniques and subjects in the work leave us to wonder if what we see is intentional or not, if the scene is real or imagined, and whether there is more to be discovered below the surface. I like to think of both Frank and Chevy and Field’s career as compellingly rugged, complexly dream-like, and ultimately leaving us wanting for more.