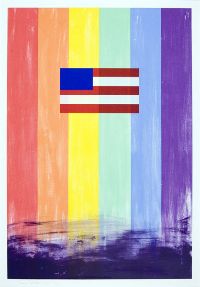 What about the colors the artist chose for the background? What do those colors represent? Maybe you’re thinking of a rainbow in the sky, a color wheel, or a celebration of gay pride. Rainbow colors have also historically celebrated peace, diversity, and equity; all people living in harmony regardless of their differences.

Notice the differences in groups of colors. The linear red, white, and blue blocks of color overlapping the painterly rainbow stripes. Horizontal vs. vertical. The visual and symbolic contrast is noted, but if you look closely you can also detect that the flag is semi-transparent, maybe not as rigid as it first appeared. Why would Bleckner have chosen to put the red, white, and blue flag in front of a rainbow background? I like to think he put those color groups together to symbolize and celebrate freedom and happiness for all people in the United States.