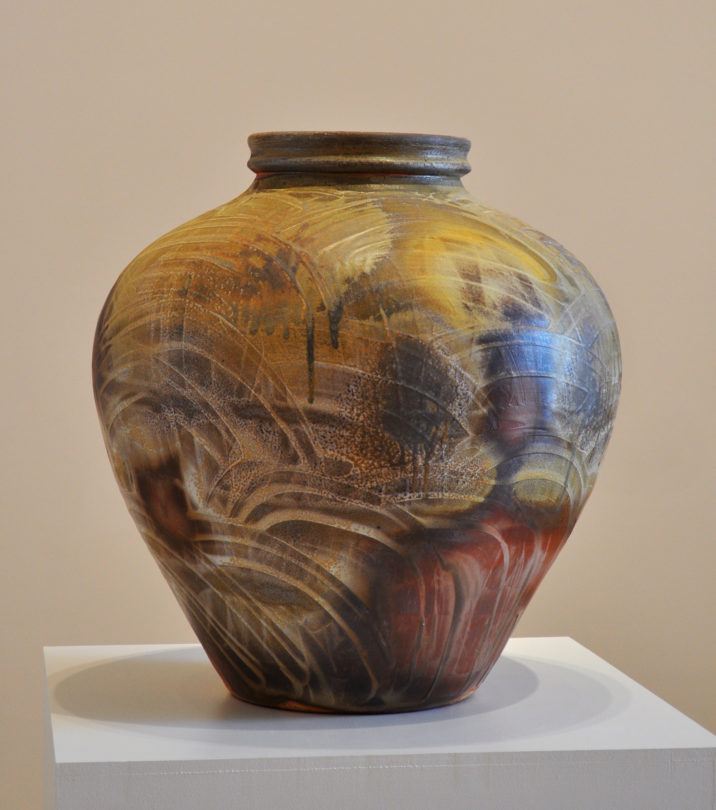 Originally from Gettysburg, PA, David Stuempfle spent many years as a journeyman potter working in different parts of the country, including Wisconsin and at Jugtown Pottery in Seagrove, NC. He’s lived and worked for more than 15 years in Seagrove—a small, rural community located in the state’s clay-rich Central Piedmont with a long and evolving pottery heritage. It’s the center of a community of over 100 potters, many of whom can claim a genealogy of several generations of potters.

Stuempfle creates his pottery skillfully and in a straightforward manner. He takes his inspiration from various cultures including early Chinese and Japanese wares and the rugged beauty of Korean folk pottery. This work—acquired by the Museum in 2020 as a gift from Robert Williams in memory of Warren Womble—demonstrates his technical skills in firing, from which the external colors on the jar develop instead of an applied glaze. The classical jug shape relates to North Carolina pottery history.

He is quoted as saying, “I make my pots from a mixture of local and commercially mined clays and fire them in a tunnel kiln which originally started out as an adaptation of the local groundhog kiln. My main clay body includes clays that come from my land as well as elsewhere in the Seagrove area. Usually, I slake down the clay that I’ve dug and dry to make it into a slip then screen it and add dry materials. Then it goes into plaster bats set up onto tables to get the water out. There is always clay in the making.”

This work is newly on display in Intersections in American Art in the Museum’s SECU Collection Hall.