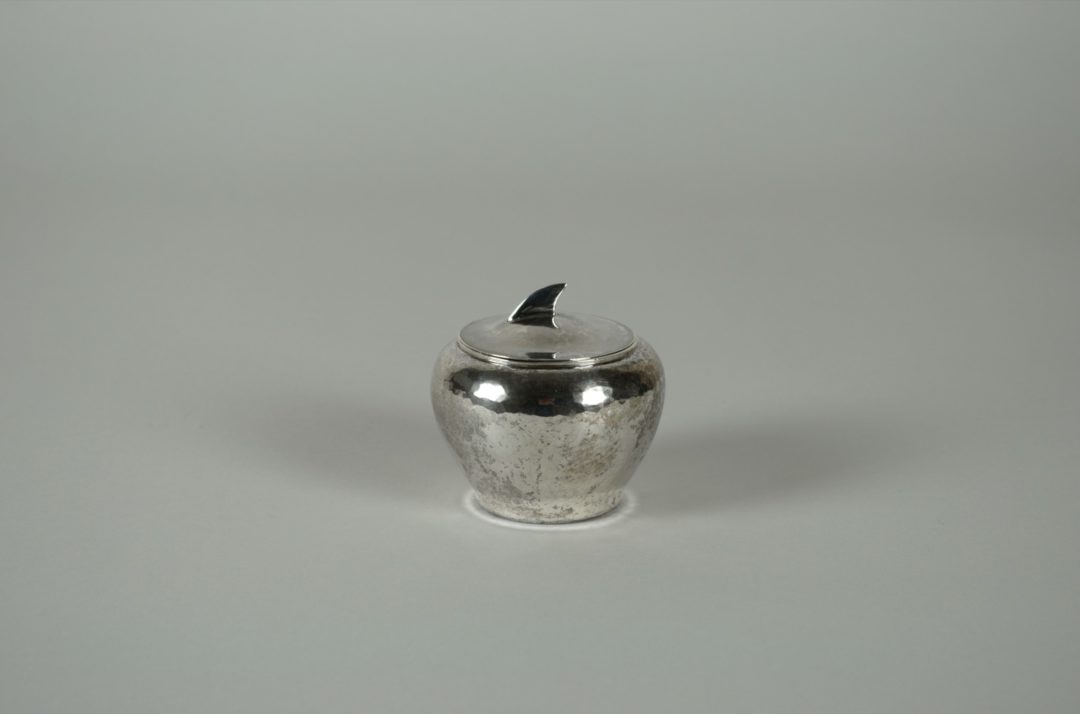 How many sharks have you seen in Western North Carolina? As we enter The Discovery Channel’s Shark Week, I would hazard a guess to say none, and yet this shark fin handled sugar bowl was made in Asheville in 1938 and resides today in the Asheville Art Museum. It is currently on view in the exhibition Useful and Beautiful: Silvercraft by William Waldo Dodge until October 17, 2022.

William Waldo Dodge Jr. (Washington, DC 1895–1971 Asheville, NC) trained as an architect, focusing on historical styles, before he volunteered to serve in the Army for World War I in 1917. While stationed in the trenches of France, he suffered from shrapnel wounds and chlorine gas poisoning. To recover, he was sent to a military hospital in Oteen, NC, where he was introduced to Margaret Wheeler Robinson (Meriden, CT 1891–1987 Asheville, NC). She taught metalsmithing, among other crafts employed as occupational therapy activities, to the patients. By 1921, they were married and moved to Connecticut for treatment of William’s ongoing respiratory problems at Gaylord Farm Sanitorium, where Margaret continued to teach silversmithing. In 1922, with William as a patient and designer, they launched Gaylord Silvercraft. When the couple returned to Asheville in 1924 Margaret focused on their young family while William continued silversmithing and opened Asheville Silvercraft. The production of the shop grew exponentially, and as William gained more architectural work, he required a new space with a silver workshop, an architectural office, and a showroom. He built the Dodge Silver shop in 1927 in Biltmore Forest and hired and trained three apprentice silversmiths to execute his designs.

Aquatic motifs were popular with Dodge and allowed him to demonstrate his creativity. He and his assistants would make tea and coffee sets that featured jumping dolphin handles carved out of ebony, silver fins on lids, and bowls with wave patterns around the rim—certainly sights not seen in the mountains of North Carolina. This shark inspired sugar bowl was made by the silversmith apprentice Johnny Green, but the design was by Dodge. Dodge Silver closed in 1942, and William focused on his architectural work, both independently and with the firm he co-founded in 1941, Six Associates.

Dodge’s architectural legacy is visible in Asheville today with many of his buildings still standing. His designs in silver emphasized his commitment to the Arts & Crafts movement’s principles. He embraced the maker’s handcraftsmanship and highlighted the natural beauty of the medium in useful household goods.