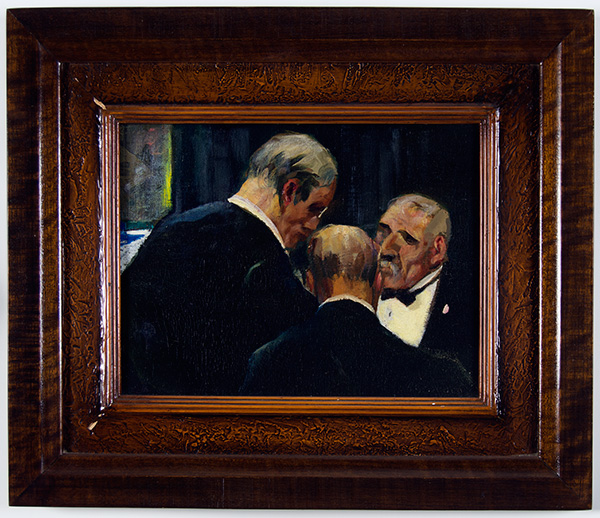 Lobbyist is a small oil painting on canvas, roughly the size of a sheet of paper. It depicts a dark meeting of three formally dressed men. The men’s black suits and the dark background combine to fill up most of the canvas with darkness. The dominance of dark shades brings out the painting’s lighter regions. The faces and profiles stand out clearly, and the greenish window on the left contrasts with the rest of the background.

I feel like this painting tells a story, despite its lack of detail beyond the three figures. The three wear clothes that suggest a certain level of affluence. They are also white and male, the race and gender that asserted societal control in 1920s America (and still benefit from residual power structures today). It seems clear to me that these men wield real power, likely economic or political. The title Lobbyist hints at the political direction. The story doesn’t end there, though. The men in the painting don’t acknowledge the viewer’s presence. We’re boxed out by the central figure, his back turned on us. The right and left figures don’t look toward the frame. The meeting is insular. Perhaps we have just stumbled upon a meeting, and we should leave before they notice we’re here! After all, they’re meeting in quite a dark room, perhaps the smoky basement of a D.C. establishment. They might have come here because they didn’t want to be overheard.

It’s hard to say what Grabach’s intentions were, of course. This story that I extracted might not be what he had in mind. I feel like the painting invites us to consider what’s going on, though. That room for interpretation is why I chose it as an interesting Work of the Week. The archetype presented⁠—a huddled, shady meeting of powerful, formal men⁠—is a spark to engage your imagination.

John Grabach (1886-1981) was an American artist from New Jersey. His first public exhibition came in 1913, so Lobbyist was fairly early in his career. Grabach’s paintings tend to feature wide brushstrokes and dark backgrounds. Throughout his career, he focused on realistic depictions of life in American cities. Unafraid of social commentary, Grabach attained fame for his depictions of human anguish in the Great Depression. Though he had a long career teaching at the Newark School of Fine and Industrial Art, he largely withdrew from the attention of galleries after the 1930s.