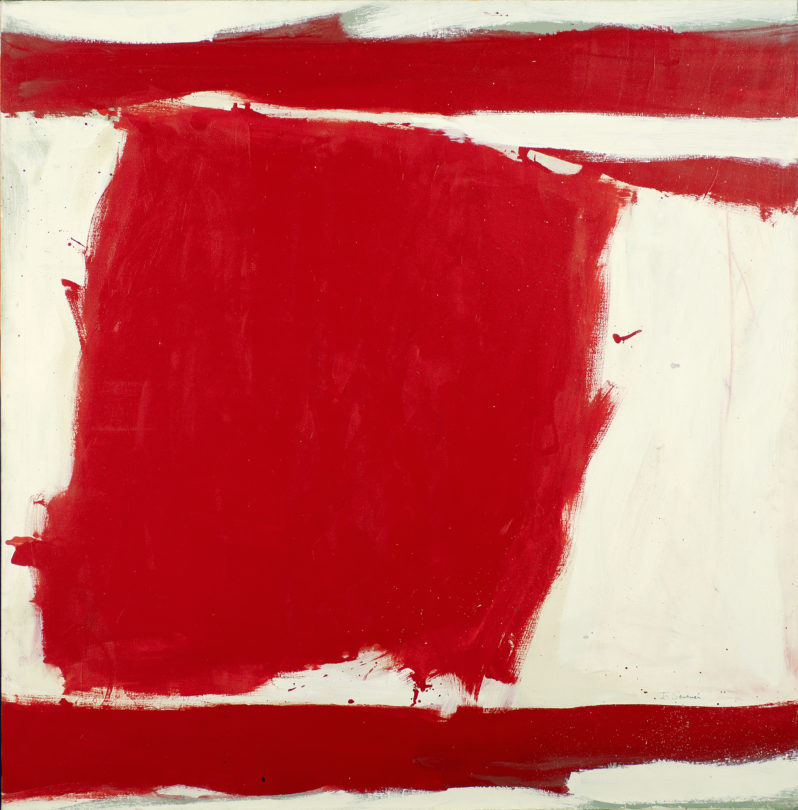 Jo Sandman’s broad, gestural marks and composed splatter place her work in dialogue with the Abstract Expressionists of her generation. The spirit of experimentation demonstrated in Sandman’s work was also key to the ethos of Black Mountain College, where Sandman was a student during the 1951 summer session, studying under Robert Motherwell. Also a student of Hans Hofmann, her direct relationship to the canvas can be found in the immediacy of the surfaces and the emotional depth of her paintings. In the early 1980s Sandman began cutting and reassembling housepainters’ drop cloths, embracing both the importance of controlled formalism and the chance elements of working with found material.

—Lola Clairmont, Craft Research and Innovation Manager at the Center for Craft

How do we look at this painting—which falls under the umbrella of Abstract Expressionism—and as the genre suggests, how is it the product of the Artist’s state of mind? The artwork opens us to the unconscious forces of the mind and makes powerful emotions visible. Instead of turning toward the outer world of forms, Jo Sandman turns inward to express pure form freed from memory. I see rough spontaneity and a refreshing raw energy. I want to experience this painting intuitively, freed from structure and rules.

The jagged horizontal lines alternating with white and the fuzzy red shape in the center go beyond the traditional shape of the proverbial St. Valentine’s heart to express the absolute emotion of love, as if to say that love has many forms. Despite its title’s reference to feeling, the image can be experienced by anyone who views it without sentimental nostalgic glasses. It’s freed from any direct figurative representation, including bodies, clothing, or other accoutrements.

Color and line evoke feelings without representation. Red, the color of passion—particularly against the stark white—is all the more red because of the white, like the way the cardinal stands out more dramatically in the white winter landscape.

The lines and shapes are irregular but that doesn’t mean the painting is off-kilter; view it upside down and it’s still balanced because of the repetition of lines, which are rhythmic, meditative, and organic. These lines can be pleasing or jarring depending on the viewer’s perspective, just like human emotions run a gamut of powerful variants of love, sometimes all at once. I enjoy the freedom I feel when I look at this painting.