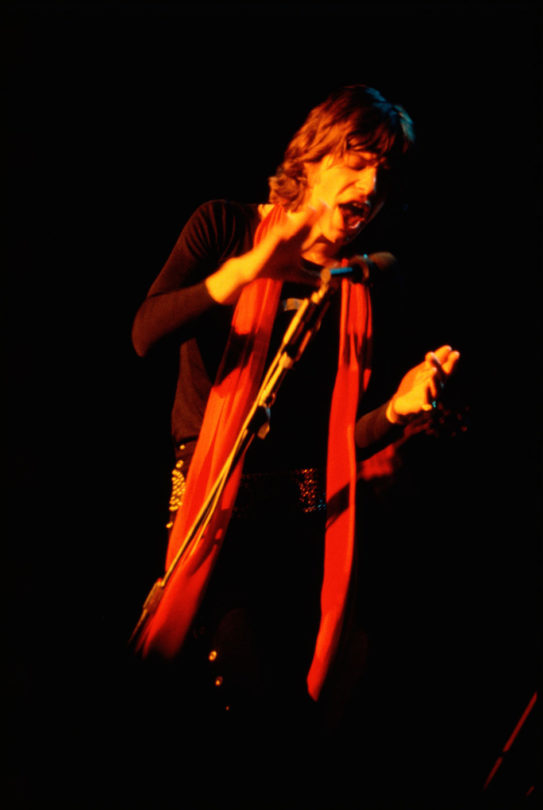 I was sorting through boxes of Walter Iooss’s work in the Museum’s vault and updating their measurements in the collection management system before many of them were to go on display in an exhibition, when I saw him standing there, singing. I recognized him immediately, having travelled the world to see him in concert several times—the one, the only, Mick Jagger. My first thought was, “what is Iooss doing at a Stones concert in 1969? Isn’t his specialty in sports photography?” Perhaps capturing Jagger’s infamous dancing skills was much like photographing an athlete mid-play. I wonder what Iooss was thinking about as he took this picture. Did he know the Stones would go on for the next half century changing the scene of rock and roll? Or did he think he was just getting a photo of a star who was on his way out of fame?

Having studied the 1960s in my undergraduate and first masters degrees, my counterculture wheels started turning in my head. On the back of the photograph, Iooss had written that the photo was taken in 1969, which was such a pivotal year for the 1960s, both in music and in politics. Based on the Rolling Stone’s US tour dates that year, Iooss would’ve taken this photograph between Woodstock and Altamont, two very important and very different music festivals. Woodstock has gone down in history as the culmination of the 1960s “hippie” movement as the largest musical festival at the time (August 1969) that espoused peace and love. The Rolling Stones missed performing at Woodstock and desperately wanted to recreate such a peaceful and loving event for the documentary they were filming of their tour that year. Jagger thought Altamont was the ticket, the next Woodstock, where he could be the star of the show.

However, Altamont turned out to be the opposite of Woodstock. Taking place only four months later in December, Altamont was a violent one-day festival that saw fighting, looting, stealing, and even several deaths. Filming their shows as they had all tour, the Stones captured this violence in their documentary, where you can see a man being killed as Jagger was singing on the stage. Altamont is now known as the death of the 1960s, the end of the era of lighthearted fun and idealistic hope. Many stars like the Stones were shocked and heartbroken by the event, forever changing the outlook of those who’d been hippies in the months before.

Did Iooss foresee the downfall of the counterculture movement before its stars like Jagger did? Did he capture this photograph in attempts to retain the innocent idealism of the 1960s before it came to a violent end? What can be learned about the 1960s music scene from this photograph as we look back at 1969 and see that it was taken between two iconic moments? All these questions were floating through my head as I measured Jagger’s photograph and turned it over to move onto the next Iooss work in the box, subconsciously humming “Under My Thumb,” which will no doubt be stuck in my head for the rest of the day.