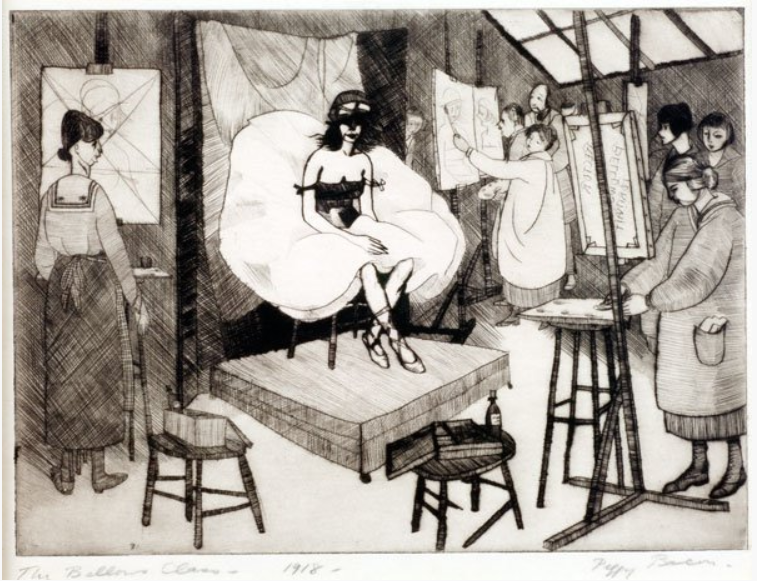 Peggy Bacon was born in Connecticut in 1895 and home-schooled by her artist parents until she was 14, when she was sent to a boarding school. Bacon began her formal art training when she enrolled in the New York City School of Applied Arts for Women in 1913. From 1915 until 1920 she studied at the Art Students League in New York under John Sloan, George Bellows, and others.

Bacon’s circle was formed at the Art Students League and the League’s summer school in Woodstock, NY. There, she met her husband, Alexander Brook, and they were married in 1920. Her reputation was built on her drawings and prints, which often satirized the people around her in their ordinary habitats—at work, dances, museums, on street corners, etc. She became sought after for her illustrations and witty verse in magazines such as The New Yorker, New Republic, Fortune and Vanity Fair. Between 1919 and 1966 she illustrated over sixty books, nineteen of which she also wrote. Bacon taught extensively in the 1930s and 1940s at the Art Students League, and at regional colleges and secondary schools in Philadelphia, New Jersey, and New York.

I like that this print gives you a glimpse into one individual’s life at a particular moment in time. The title and date clue us into the time and place: early in the 20th century, in an art class under the instruction of George Bellows. The back of the canvas seen at the right is inscribed (backwards) “Bellows Portrait / Rector” cluing us in that this was a class in portraiture, where she was joined by her friend, Ann Rector.

Over 50 years later, Bacon spoke to an interviewer from the Smithsonian’s Archives of American Art about her experience studying with Bellows. Although he was well-liked by many students, Bacon did not care for him personally or as a teacher, describing him as him boastful and full of himself. At the time she made this image she was enduring criticisms from Bellows that were rather harsh. “He said to me ‘Oh, why don’t you quit? You’ll never be an artist. You’ll never be able to do anything.’” Then later Bellows praised one of her drypoints that depicted the class, saying, “That’s the best thing that’s been done in this class all year.” We know that he was not referring to this particular print, as she describes it as including Bellows at the center of the image—so it must have been The Bellows Class, an impression of which is in the collection of the Philadelphia Museum of Art. While Bacon was probably shocked that Bellows would praise something she did, it probably wasn’t lost on her that it was a work that featured him front and center!

In the midst of these ups and downs in the life of a young artist in New York, going on in the background was the 1918 influenza pandemic. The most severe pandemic of the 20th century, the Spanish flu infected one-third of the world’s population according the U.S Centers for Disease Control and Prevention. Bacon’s light-hearted scene reminds us that art continues to thrive in all times and circumstances.

This print is included in the exhibition Intersections in American Art.