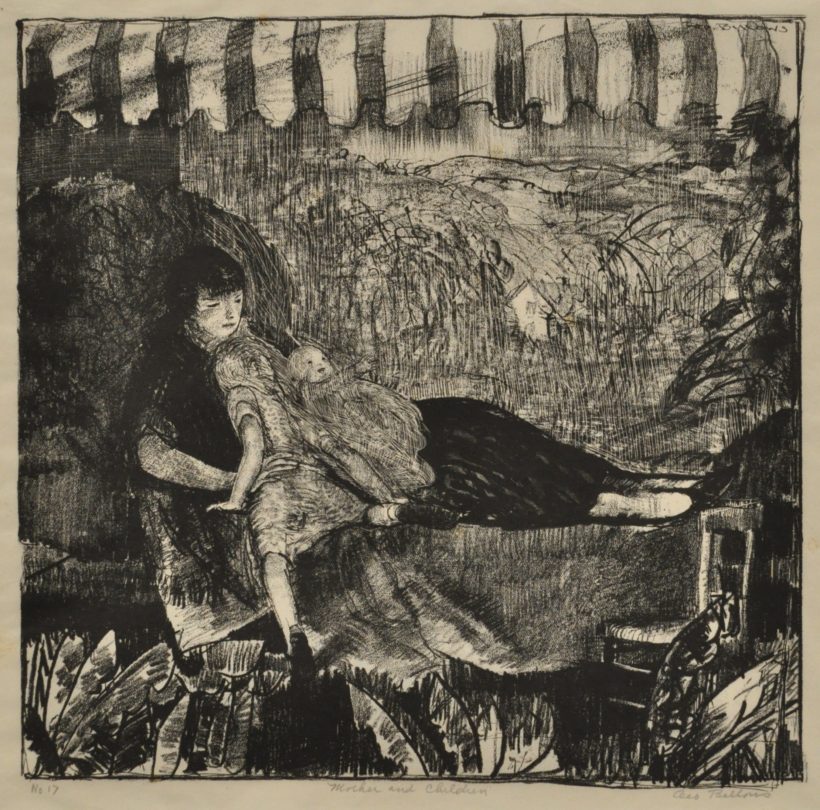 During the summer of 1916, when artist George Bellows and his family were staying in Camden, ME, he began to experiment with plein air portraiture in which he attempted to integrate the human figure with the outdoors. Bellows’s struggle to finalize this new style is confirmed by two monumental portraits that Bellows left unfinished: My Family and the nearly identical Study of Emma and the Children. Both show his wife, Emma, reclining in a hammock with their young daughter Jean and their older daughter Anne. They are sheltered by a prominent striped awning and framed by dense foliage in the foreground and at both sides, while the background comprises a verdant landscape with a house.

Bellows made a third version of My Family in the form of his 1916 lithograph Mother and Children that was reproduced in the radical leftist magazine The Masses (June 1917) under the title June Again. The contours of the forms are noticeably less geometric than in either of the paintings, and Jean is represented as an infant rather than a toddler. Bellows’s depictions of his family were in keeping with Robert Henri’s belief that modernism was a broad term encompassing not only radical political agendas and pictorial experimentation but also more conservative subject matter and a knowledge of and reverence for artistic precedents and traditions. [Adapted and quoted from Robert Torchia, “George Bellows/My Family/1916,” American Paintings, 1900–1945, NGA Online Editions]