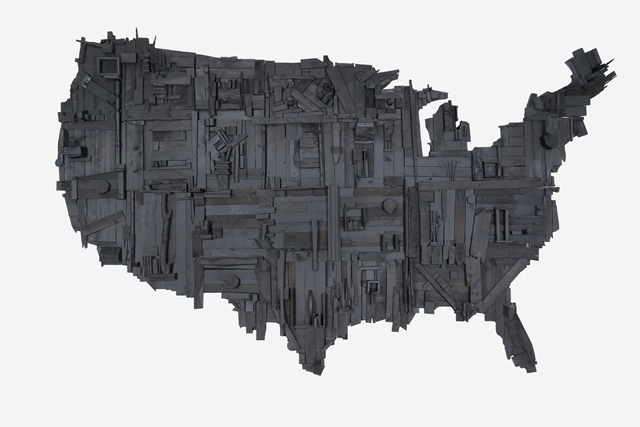 In summer 2017, I saw My Big Black America for the first time in person. This monumental found-object sculpture had been brought to the attention of Museum staff, and our associate curator at the time, Carolyn Grosch, and I flew to Baltimore to meet artist Wesley Clark at C. Grimaldis Gallery, where it was the cornerstone of their summer show. If you’ve seen My Big Black America, you’ll know that it makes a big impression. At 10 feet tall and 16 feet wide, it’s an exceptionally large rendering of the continental United States in deep black. With a sense of the sculpture’s awe-inspiring presence and the artist’s purpose, we knew that it would fit perfectly in the Museum’s Collection of 20th- and 21st-century of American art and provide a striking first impression upon entering the new building.

Scarred wood from disassembled shipping crates provides the sculpture’s foundation, onto which Clark layered salvaged elements from turned furniture, tree limbs, and fresh, unblemished timber. For the artist, this mix of old and new wood alludes to generations of African Americans, past and present, whose labor built the infrastructure and economy of the United States. Each wood reacted uniquely to the paints and stains that Clark applied, creating a variation in value and hue that reflects the spectrum of blackness in America. Said Clark, “I chose wood as my medium because of its parallel characteristics to human flesh; it holds scars and visibly ages, adding individual character to each piece.”

The Museum’s My Big Black America is actually the second, definitive version of the sculpture. The first version was a culminating project of Clark’s graduate studies, inspired by the campaign and eventual election of Barack Obama in 2008. Then the father to two young children, Clark sought to create a suitable monument to African Americans and to acknowledge their claim to the country. That smaller sculpture was eventually disassembled; the artist intermingled some of its wood into the final version, created for a 2015 group show that explored African Americans’ triumphs and lived injustices during Obama’s presidency.

The addition of My Big Black America represented a number of firsts. When Clark traveled to Asheville (for the first time) a year ago this week to install it in the Windgate Foundation Atrium, it became the first of his works to enter a museum collection and the first artwork installed in the new Asheville Art Museum. It has quickly become a visitor favorite, a touchstone for conversations about the current state of America, a stop on most group tours exploring the elements of art and principles of design, and the star of innumerable selfies.

This sculpture is currently part of the exhibition Many Become One, which explores the American ideal E Pluribus Unum—that strength comes from uniting disparate parts into a whole. In light of events of this past week, we look forward to reopening our doors and providing a safe space to listen, learn, and stand together through conversations centered around art.