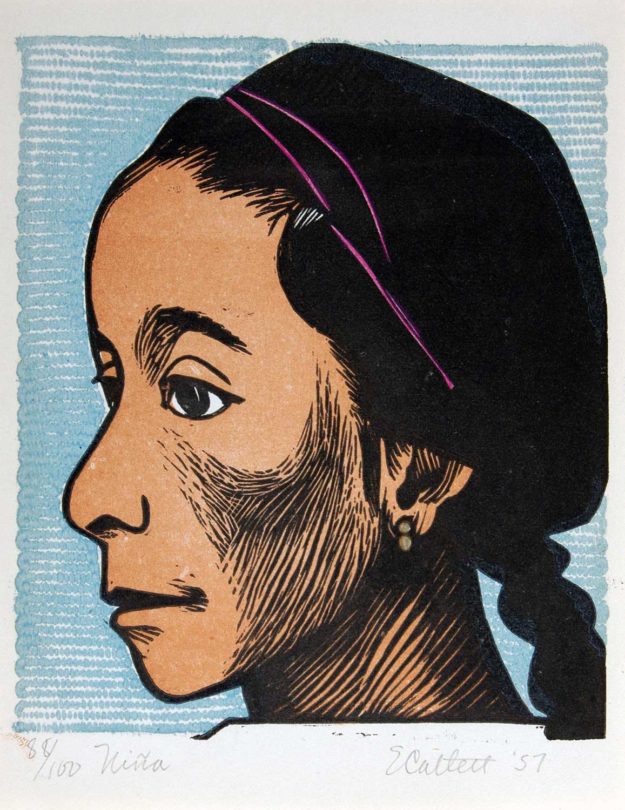 Catlett was dedicated to depicting the African American experience and to forming interracial alliances, and she created art to influence popular opinion. Although her career began in the United States, her studies at the Taller de Gráfica Popular (TGP) Ciudad de México from 1946 to 1966 left a fundamental mark on her work. TGP’s deep history of political engagement through printmaking encouraged Catlett to continue to work in the medium, giving her access to a universal language for illustrating the dignity and struggle of marginalized people. Niña is an intimate portrait that captures the profile of a young girl. Using a close-up view of the subject and the subject’s strong gaze, Catlett brings individualism, power, and grace to her subject.

Artist Elizabeth Catlett titles this print Niña, the Spanish word for “girl.” It was created in 1957 in Mexico, where Catlett resided from 1946 until her death in 2012. Catlett makes use of lines of differing length and direction, throughout this print. Starting with the light blue and white horizontal background, Catlett creates a woven texture. The most distinctive line is the pink hair ribbon that takes your eye diagonally from the upper middle section down to her neat braid. The most prominent lines are from the girl’s cheek to her ear and then down her neck, drawing our eyes to the bottom of the print. The figure’s eyebrows and hairline create shorter lines.

What age do you think Catlett’s subject is? I think she’s a young teen. How is the artist letting you know what she is thinking and feeling? Her eyes and her lips provide me with a glimpse into her mood, and she appears to be pensive and somewhat sullen. She has her hair neatly pulled back and braided. The pink ribbon, which keeps the hair on her forehead off her face, ends just above the simple brown earring. Both draw our eyes to the middle of the print and invite us to contemplate the individual before us.

Elizabeth Catlett was an American and Mexican graphic artist and sculptor, working primarily in printmaking and wood and bronze sculpture. However, she is best known for portraying the 20th-century African American experience, specifically the female experience. She lived from 1915–2012. She was born in Washington DC, in 1915 and was the grandchild of freed enslaved people. She received a fellowship to study in Mexico City in 1946, officially moving there later that year and receiving her Mexican citizenship in 1962. There, she worked as a teacher and artist, and an advocate for social change