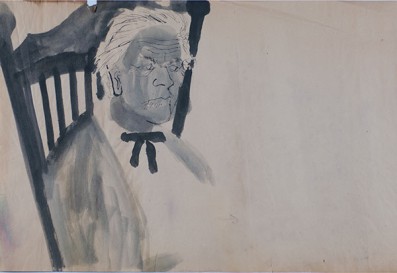 In a chair sits a woman—stoic, blue, and simplistic, perhaps in contemplation. This work by Ruth Asawa, Portrait of Johanna Jalowetz, offers a calming look at an aging woman, done only in shades of blue and gray. I particularly enjoy the use of blank space throughout the piece, allowing the viewer to fill in the rest of the image with their own imagination. Through this ink work, one gets a glimpse into Jalowetz’s life; one can see her wisdom that she has gained through the years simply through Asawa’s drawing. This highlights her wondrous ability to convey the emotions and the stories of her muses simply through a few brushstrokes.

Asawa was born on January 24, 1926 in Norwalk, CA. Her main medium was sculpture, and she was often known as the “fountain lady” for the famous fountains she created. She is also known for her unique wire sculptures. Asawa experienced many hardships on her journey toward becoming an artist, including internment camps. As a Japanese American, she was forced into camps during World War II because of the growing fear of Japanese spies. Afterwards, she attended Milwaukee State Teachers College before transferring to Black Mountain College. In the 1950s, she became well known and had her works featured in the San Francisco Museum in San Francisco, the Museum of Modern Art in New York, the Whitney Museum of American Art, and many others. Her work serves as an inspiration for those struggling, as she rose from her hardships and used them to fuel her artistic passion.

Portrait of Johanna Jalowetz highlights just that—Asawa’s remarkable ability to share her story and the stories of others through her artwork. This work offers a calming look at an aging woman, reminding us all that something does not have to be grand and detailed to simply be beautiful.