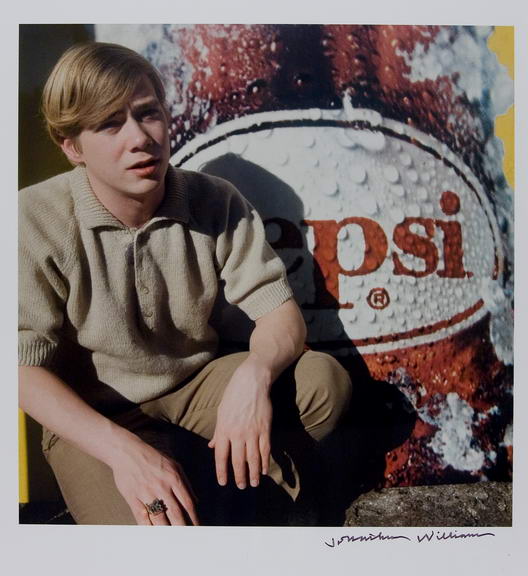 Jonathan Williams attended Black Mountain College’s famous 1951 Summer Institute in photography at the suggestion of Harry Callahan, who told Williams he would be teaching at the College that summer. At Black Mountain College, Williams, a publisher of independent press Jargon Society’s handsomely designed avant-garde books, promptly fell under the sway of poet Charles Olson. Williams maintained a lifelong interest in photography as both artist and collector. In addition to his black-and-white photographs of Black Mountain teachers and students, which have graced many publications about the college, less well-known are his color photographs: portraits, objects, signs. This photograph of a young Tom Meyer, taken the year the two met at Bard College, plays with Pop Art imagery by including the large Pepsi logo in the background.

Curatorial Assistant & Luce Project Manager Hilary Schroeder tells us why she finds this photo so captivating:

I enjoy how this photograph of Thomas Meyer, Jonathan Williams’s partner of 40 years, captures an effortless coolness exuded by the young poet. The colors are subdued yet sumptuous. In spite of his casual pose, Meyer’s presence is as monumental as the large Pepsi advertisement behind him, and he, too, feels iconic. Williams had an innate ability to give us not just an image, but a sense of a person’s essence as well, resulting in intimate portraits of many artists and poets, including David Hockney, Charles Olson, and M.C. Richards.