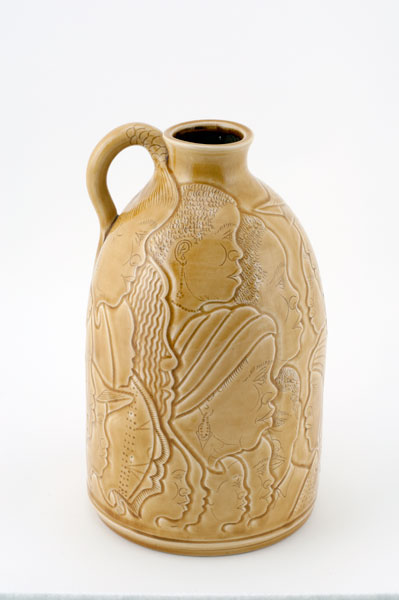 Embedded in the history of craft is its ability to let the historically silenced express themselves artistically; but when craft allows artists to make their voices actively heard, it can serve an even higher purpose. The pottery of Upstate South Carolina artists known as Pottery by Eugene offers husband-and-wife team Rosa & Winton Eugene a way not only to share their skills and creativity but also to communicate their voices as African Americans.

Pride references the African American Civil Rights Movement, and in Rosa Eugene’s own words, as she explained it to the collector who bought it: “This collage of faces is intended to convey to the viewer how pride can be the only thing that holds people together.” The handle is formed by connecting the representation of two women’s braids together. Winton Eugene etched the many profiles of men, women, and children into the clay and layered them, giving each his or her own expression. Notably, there is only one man’s face that looks straight out of the jug toward the viewer, visible on the lower right of the image above. Who is this man? Does he look at you, the viewer, to make you feel a part of this group depicted on the jug? Does he single you out for not participating? Or is he simply showing his pride?

Winton Eugene throws pottery on a wheel and decorates it, and Rosa Eugene glazes it. As two self-taught artists, pottery-making was a second career for both: Rosa Eugene was a nurse, and Winton Eugene had been a carpet installer and an army paratrooper during the Vietnam War—though he had always seen himself as an artist. In 1985 they retired to Cowpens, SC, where they continue to work and sell from their home studio today.