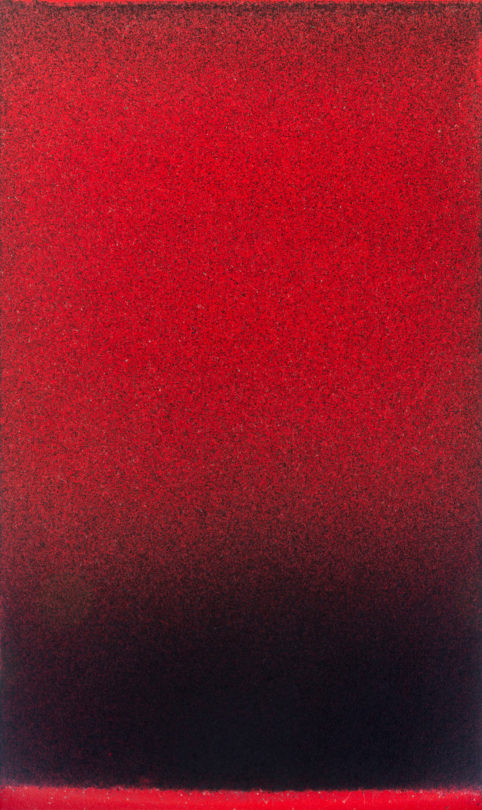 Though this painting may appear to be a fairly straightforward exploration of abstraction, where color and form take the place of figures or recognizable objects, artist John Knuth created it in a rather unusual fashion. Instead of a paintbrush, Knuth builds an enclosure around the canvas, in which thousands of common house flies consume different paint colors and deposit them in varying density and locations on the canvas. The Museum of Contemporary Art, Los Angeles produced a video (below) in 2013 that captures the artist’s process. Knuth’s method of paint application is experimental and non-traditional, even though he is working in one of the oldest techniques. When we stand in front of a painting, it can be easy to take for granted or assume how the artist made the work, and Knuth is among artists who are seeking to challenge or reinvigorate the ideas of what defines a painting. Though the method of creation is perhaps repulsive, the resulting product is aesthetically pleasing. What at first might seem a Color Field painting in the vein of Kenneth Noland or Mark Rothko, close inspecting of the canvas reveals tiny individual dots of paint that create the hazy layers of color.

Regardless of the medium, Knuth is interested in where nature and civilization meet, as well as chaos and control. The artist sees the house flies as collaborators, harnessing their potential in the process of creating a painting. Much of his inspiration for selecting colors and shapes within each work that are played out by the small insects comes from the flow and entropy of large cities such as Los Angeles and New York. Redhook Blackout comes from a recent series of flyspeck paintings wherein the artist draws inspiration from New York and its waterways. The title is perhaps a reference to the Red Hook neighborhood in Brooklyn, where the East River was severely polluted by a wastewater treatment plant failure during a blackout in 2003.

Originally from Minneapolis, Knuth presently lives and works in Los Angeles. He received his undergraduate degree from the University of Minnesota and his graduate degree from the University of Southern California. Knuth makes paintings and performances using materials such as distress flares, metallic thermal blankets, live snakes, and the common housefly.