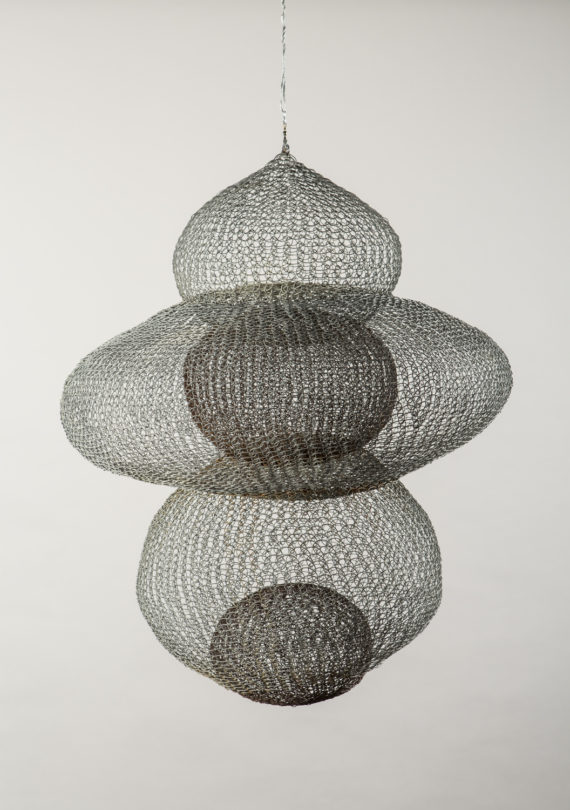 My curiosity was aroused by the idea of giving structural form to the images in my drawings. These forms come from observing plants, the spiral shell of a snail, seeing light through insect wings, watching spiders repair their webs in the early morning, and seeing the sun through the droplets of water suspended from the tips of pine needles while watering my garden.

Ruth Asawa (Norwalk, CA 1926–2013 San Francisco, CA) is foremost known for her wire sculptures inspired by her travels to Mexico in 1947. She enrolled at Black Mountain College in the summer of 1946, where she studied design under Josef Albers and experimented with materials. Asawa combined her explorations at the college with the looped wired baskets traditionally used to hold eggs at the markets in Mexico, turning the utilitarian material into sculptural shapes and forms.

During World War II, Asawa was incarcerated at a Japanese interment camp because she was Japanese American. Afterwards, she attended Milwaukee State Teachers College before transferring to Black Mountain College. Asawa lived in San Francisco, where she was a sculptor, painter, and printmaker, as well as an activist for the arts in education.

In 1954, Asawa was asked to explain her work for her first show at the Peridot Gallery in New York. What set her work apart from others making sculpture then was their lightness and transparency, as well as their movement since they were suspended from the ceiling. She wrote, “A woven mesh not unlike medieval mail. A continuous piece of wire, forms envelop inner forms, yet all forms are visible (transparent). The shadow will reveal an exact image of the object.” It was only much later in life that she realized that she had made the same forms as a young child on her parents’ farm. Sitting on the back of a horse-drawn leveler, which scraped the soil so that irrigation water could reach the end of the rows, she dragged her toes in the fine soil as the horses walked to make the playful and complex biomorphic outlines of her looped wire sculptures. (via ruthasawa.com)

Campaign Manager Rebecca Lynch shares why Asawa’s hanging sculpture is her favorite work in the Collection:

I fell in love with the work of Ruth Asawa when this extraordinary looped wire sculpture was gifted to the Museum’s Collection. Fascinated by the technical aspects of the construction of the work, I am also mesmerized by her exploration of the continuous line, of forms within forms, and the wonder of the interplay between sculpture and shadow-casting.