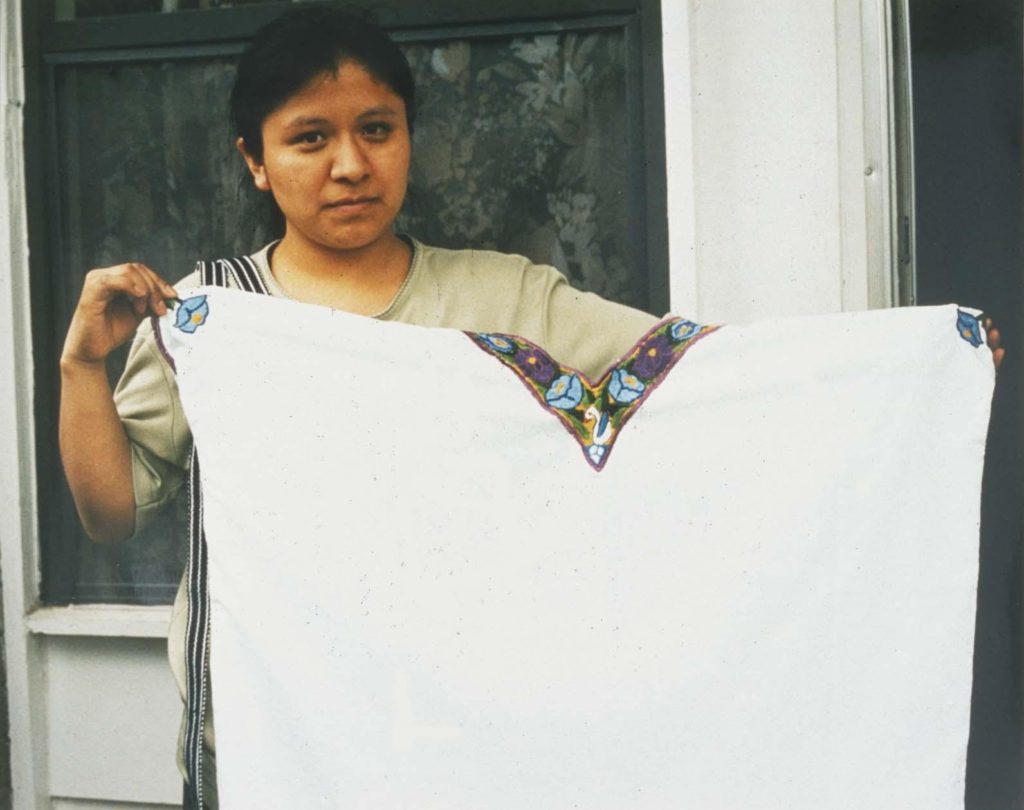 Señorita Eulalia Mateo is pictured here with her huipil in this photograph by Kelly Feltault, which was shown as part of the 1998 exhibition at the Asheville Art Museum, A Journey in Fiber: Latin American Fiber Artists in Western North Carolina. Mateo’s textiles were also featured in the exhibition. The huipil is a traditional garment worn by indigenous women in Central America. Its decorative elements indicate the ethnicity, community, and history of the wearer. The huipil generally contains a myriad of colors and patterns and continues to evolve with the movement of people and time. Feltault’s project included artists from Guatemala, Mexico, Costa Rica, and El Salvador residing in North Carolina. The unifying theme of the exhibition centered on women who were fiber artists telling a distinct story, capturing both their culture and individual creativity.

Señorita Mateo was born in Santa Cruz Verias, Guatemala, and moved to Morganton, NC in the 1990s. It was in Guatemala that she learned her native language Canquoval in addition to Spanish. The production of huipiles is a tradition that Mateo learned from her mother and one that she has carried forth as part of her cultural identity into her new life in the United States. Mateo produced the huipil by weaving it on a backstrap loom, weaving the designs traditional to her village in her village colors.

Kelly Feltault was the Project Coordinator for “Here and There: Latin American Women’s Textiles in North Carolina” in 1996, and the Folklife Specialist for the Festival for the Eno in 1995. She has extensively researched ethnic communities of quilters and women’s culture. She participated in the North Carolina State Arts Council Roundtable on Folk Arts in Education and was a quilt judge for the First Annual Native American Quilt Show of North Carolina. Her work has been exhibited at the VIM Gallery in Richmond, VA, the Artspace also in Richmond, and Fiatal Muvescek Clubja in Budapest, Hungary.

Education Intern Ivan Melchor tells us why this is his favorite work from the Collection:

I chose this piece because of my interest in human migration and Latin American communities in Appalachia. Mateo’s garment serves as a preservation of indigenous culture amidst the uncertainty of migration into Morganton, NC. Yet it exists in a paradox, as the huipil itself betrays a history of change. Spanish colonization meant that the sides of the huipil were sewn up centuries ago, because Catholic priests believed it unwholesome for women to expose their breasts. In the late 20th century, civil war in Guatemala brought the huipil into question as a symbol of resistance amidst the genocide of indigenous peoples by the government. Mateo’s work tells the cultural history of the wearer and how perception has affected the wearer’s cultural history. It begs to ask how Latin American migration is affecting the history of Appalachia and how our perception of their arrival will affect theirs.