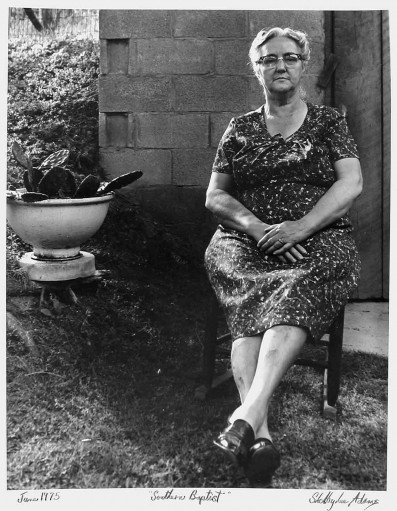 My roots in the South run deep. Both of my parents spent their youth in rural South Carolina, venturing up into the Appalachian mountains as an escape from the drudgery of school, work, or whatever else ailed them. Back then, entertainment wasn’t found in cellphones or Netflix. It lay just north of their home, in the wilderness of the Appalachia. Now I’m lucky to live here, my home tucked where the foothills meet the bigger mountains. There is such a distinct culture in this region, particularly when it comes to religion. Both of my parents grew up as Southern Baptists, engrossing themselves in the tightly knit communities their faith offered. Shelby Lee Adams portrays a member of this faith in the work Southern Baptist.

Adams was born in 1950 in Hazard, KY. He spent his youth moving from place to place and witnessed firsthand the complexities of the South. He was disgusted with how the media often portrayed those in Appalachia as starving, poor hicks. Later, he attended the Cleveland Institute of Art and felt the need to reject his southern upbringing due to the way people viewed him. He soon realized the importance of his identity through Farm Security Administration (FSA) photographers sent to document the hardships of the poor, and re-embraced his heritage. He still continues to photograph their struggles.

No matter where I go, this beautiful region will always harbor a piece of my heart. This photograph, showcasing an elderly woman, reminds me of my roots—those of faith, and those of home. I will always carry the wonder and complexity of this abode, no matter where life takes me.

Work of the Week