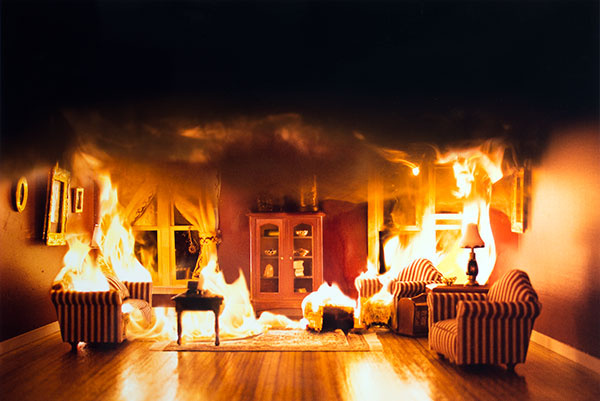 Artist Matthew Albanese is the self-described “Creator of Strange Worlds, a series of hyperrealistic miniature worlds.” His website says that his fascination with film, special effects and movie magic—and the mechanics behind these illusions began early, and can still be seen in his work today.

This living room engulfed in flames exists not in an actual burning house, but rather documents a scene constructed by the artist. Albanese’s mode of working involves creating highly detailed scale models with exquisite and precise details, often using unusual materials. By photographing from an angle that allows the detailed elements of the scene to blend into a believable reality, Albanese gives the viewer the sense of looking at something life-sized. He takes this scene a step further, activating it by setting it on fire and capturing this fleeting moment of destruction as the tediously created model is consumed by flames.