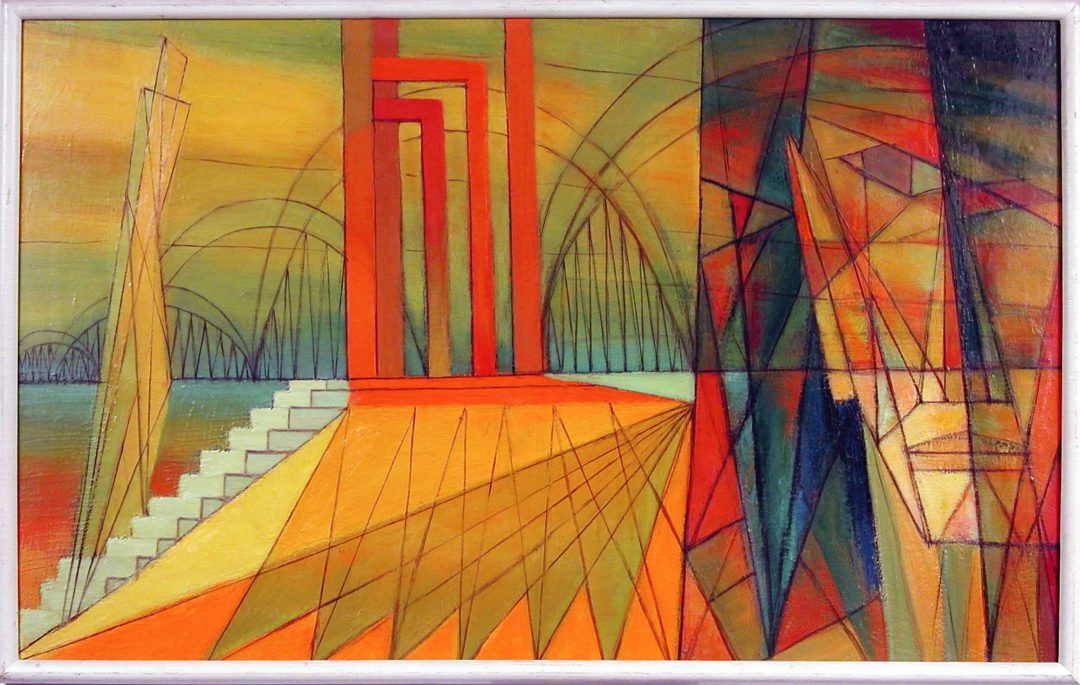 The isolated figure of the dreamer on the right of this composition could be interpreted as an architect or as the artist, Isac Friedlander, himself. Is the figure dreaming of coming to the US and seeing a cityscape like the one evoked in this painting, or of building structures beyond the scale of humanity? Friedlander’s work illustrates the challenges faced by humans. He had been sentenced to death as a young man in Latvia as the Russian czars took power. Following a set of circumstances allowing for his release, he studied at the Academy of Rome. After immigrating to New York City in 1929, he arrived in time to document people suffering from the Great Depression, resulting in a series of prints for which he is best known. The city became his adopted home, and by the time he painted this work in 1960, it was very familiar to him.

Painted towards the end of Friedlander’s life, this oil painting speaks less directly of the suffering he so often depicted in his works and potentially more about hope and possibilities. On the right, the angular face appears to be partially shadowed, and the expression is difficult to read. The aggressive, geometric shapes and dark, cool tones of the face and background suggest a history of hardships. The intense colors speak to a range of strong and complex emotions.

On the left I see a figure ascending a staircase. Although angular, this figure feels relaxed among the warm colors of what might be a sunset or sunrise in the city over a river. The architecture resembles buildings or doorways, and the curves of what might be a distant bridge soften the hard lines throughout the painting. Perhaps at the top of the staircase is a new opportunity or a new start that this dreamer seeks.

Although the distinct lines feel rigid, the application of the paint is very smooth but also imprecise as it blends within each form. I find that I can follow the lines and colors throughout this work endlessly and that there’s no beginning and no end as my eyes bounce from edge to edge.

Friedlander’s The Dreamer is on view in Old World/New Soil: Foreign-Born American Artists from the Asheville Art Museum Collection through August 2, 2021.