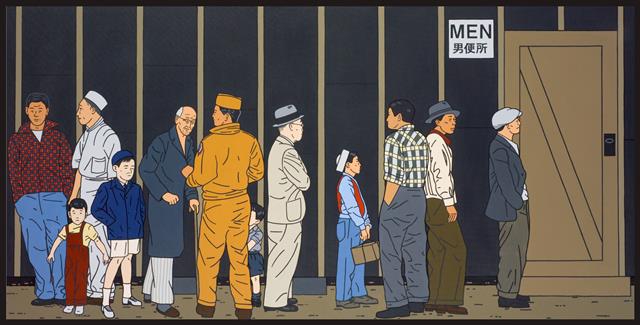 Roger Shimomura’s The Lineup depicts incarcerated Japanese American men of varying ages waiting for the restroom at the Minidoka War Relocation Center in Idaho during World War II. Drawing from his memories of living at the camp from age 4 to 6 and his grandmother’s diaries documenting her time there, the artist notes that some of the most frequent complaints about daily life revolved around the constantly long lines for the restrooms. This scene reflects one of Shimomura’s few clear recollections from his time at Minidoka, and the boy in red overalls seen at the left is a self-portrait of sorts.

The Lineup shows 12 males of various ages, casually dressed and in relaxed poses, four of whom are young boys. Some are engaged in conversation as they wait. The viewer’s eye is drawn to the sign “Men” and the Japanese equivalent characters directly underneath. Why don’t the Japanese characters precede the English letters? It’s obvious that the latrine which serves these males is located in one of the incarceration camps that served as housing for about 100,000 Japanese immigrants and Japanese American citizens between 1942 and 1945. The image leads us to wonder about conditions in these facilities, having to serve the needs of so many people. Behind the men and boys are 12 vertical lines suggesting the components of prison camps: barbed wire fences, lookout towers, armed military guards, and search lights. Beyond the fence yawns the black void of the world these people—many who were model citizens with a strong work ethic—were forced to leave. Ironically, the expressions on their faces indicate that they are determined to make the best of a bad situation. The question we as contemporary viewers must ask is: Have we learned anything since that episode in our history involving the unconstitutional arrest of an entire group of citizens based on race alone?