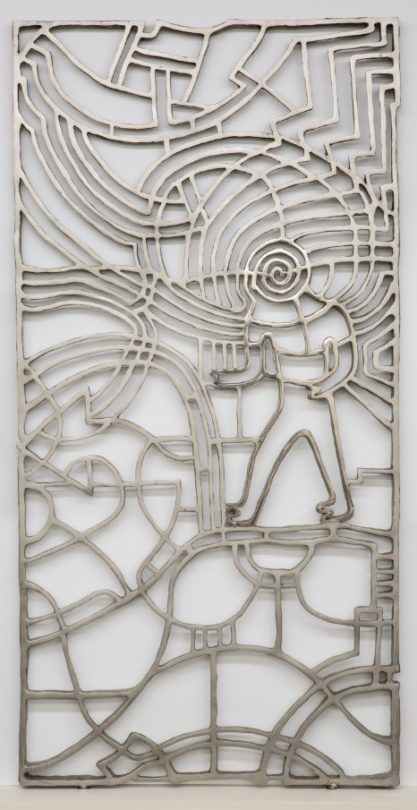 The Spiral Headed Man is a series of six panels in which artist Lorna Blaine Halper traces the life span of Spiro, a mythological spiral-headed persona of her own creation who represents everyman, from inception through maturity. The first two panels, entitled Inception, represent the genesis of mankind. Spiro moves forward through a chaotic landscape. An arrow—used throughout the panels to indicate movement and direction—points to and intersects with the second panel in which humankind reaches for an open window, a symbol for light and life. The third panel, Conception, symbolizes fertilization and birth. The figure races toward a steep hill that leads into the world. In the fourth panel, Deception, Spiro experiences the fall of man. In this landscape, he points an arrow toward two adult figures, possibly representing parents. The last two panels, Reception, depict maturity and finally peace. In the first, the arrows, previously pointed toward the deceivers, now point outward, and the window, the symbol of light, reappears. In the final image, Spiro assumes the yoga position of meditation and contemplation. The arrows fly past and above him, and the turbulent lines are now harmonious. The “Naked Tortoise,” absent a protective shell and spanning the bottom of the final two panels, represents vulnerability as well as traditional symbolic attributes of earth, patience, endurance, and longevity.

Halper enrolled at Black Mountain College in summer 1945 through the 1948 spring term except for brief absences. She studied there with both Josef Albers and Ilya Bolotowsky.