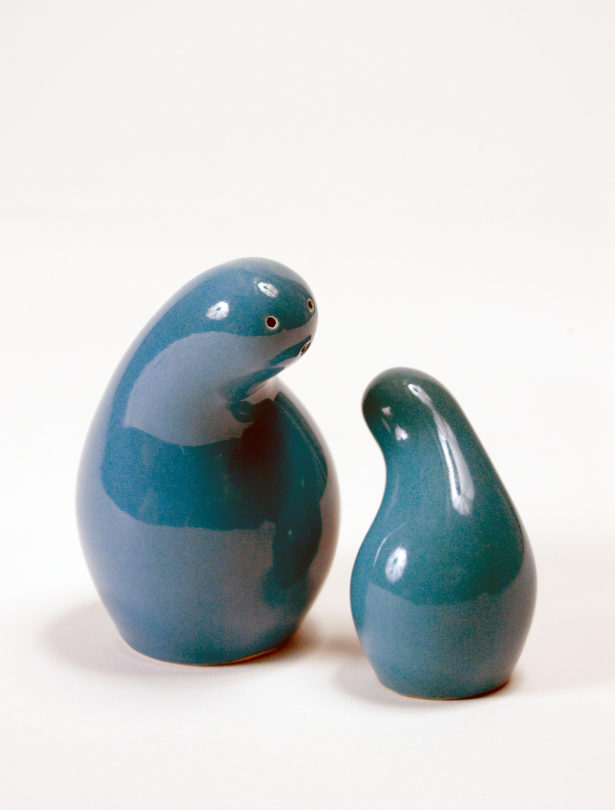 This week, we celebrate Eva Zeisel on November 13—which would have been her 114th birthday—by sharing with you some of her work in our Collection. Endearingly referred to by Zeisel as her Shmoo salt and pepper shakers, the different-sized set was formally known by its manufacturer—Red Wing Pottery—by its service name: Town and Country salt and pepper shakers. The size difference and almost interlocking relationship of the set referenced a parent and child embracing; however, the tabletop set came out just before the popular Shmoo cartoon character was introduced in the Li’l Abner comic strip by Al Capp in 1948 which captured the hearts of readers around the US. The fictional creatures lived to entertain and help humans, and in a funny way, that too is Eva Zeisel’s legacy. Her designs made life more playful and fun.

After WWII, domestic life became more casual and dining at home followed suit, becoming less formal. This was reflected in the way middle class families cooked for themselves and their choice of tableware. Red Wing Pottery, just outside of Minneapolis in Red Wing, MN, approached Zeisel in 1947 and asked her to design something inspired by this new trend. The Town and County service was born. Families could purchase the service in different colors and mix and match them as they liked, including plates, bowls, cups, saucers, and teapots. The curvilinear lines Zeisel used reflected the popularity of organic shapes at the time—called biomorphic design—and the glazed earthenware from which the service was produced made them hearty enough to stand up to daily use.

The joy Zeisel found in her approach to invention belies the fact that her early life was rather tumultuous. Born in 1906, in Budapest, Hungary, Zeisel entered the Royal Hungarian Academy of Fine Arts at 17 to study painting. To support herself, she began an apprenticeship with a potter and ended up earning a journeyman’s certification to the guild—the first woman in Hungary to do so. She then worked for ceramics factories in Germany until 1932, when she moved to Russia to continue with her career. Zeisel was very successful in Russia, working for the state-owned ceramics industry and eventually becoming the artistic director of the Soviet china and glass industry. When she was falsely accused of plotting to assassinate Joseph Stalin, she spent 12 out of 16 months in solitary confinement in a Russian prison. She was released from prison in 1937 and escaped to Vienna, just as the Nazis invaded the city.

That same year she emigrated to the US and began teaching at Pratt Institute in New York City. By 1946 she held the title of the first woman to have a solo exhibition at the Museum of Modern Art. Thereafter she successfully designed product lines for numerous American and international china and interior design companies. Zeisel died in 2011 at the age of 105.

Eva Zeisel’s Town and County salt and pepper shakers are currently on view in Intersections in American Art in the Museum’s Newton Gallery in the SECU Collection Hall.