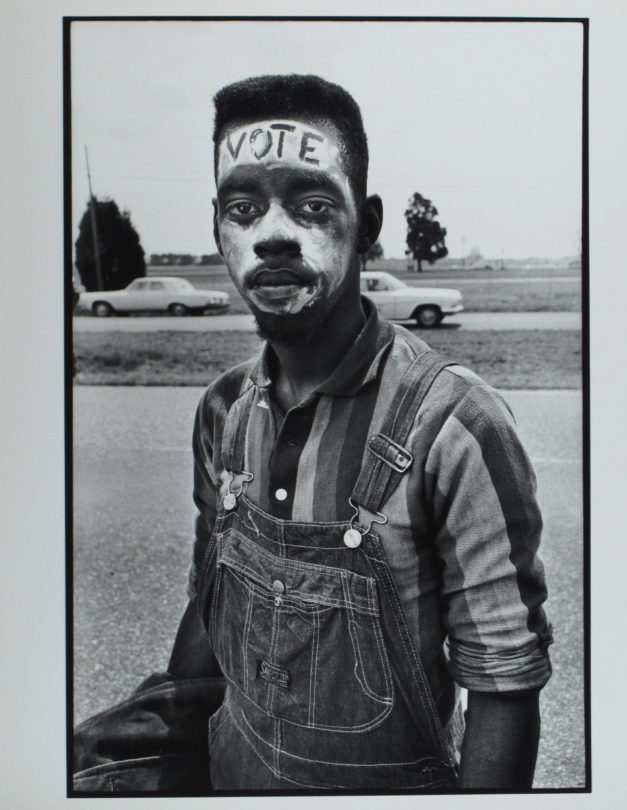 The depth of emotion in this young man’s eyes caught the attention of my own as I recently explored the exhibition Intersections in American Art. With 97 days to go before the 2020 presidential election and the growing Black Lives Matter movement, this photograph speaks volumes about the importance of voting, the right to vote, and the ongoing fight for equity and justice. The moment within this frame was captured on film 55 years ago in 1965, yet is painfully relevant today.

Magnum photographer Bruce Davidson took many photographs of this individual during one of the Selma to Montgomery marches to fight for Black suffrage in March of 1965. In this specific frame, he singled the individual out from the crowd against a very simplistic background that offers no further context. This contrast and lack of context forces the viewer to read and re-read the message “Vote” across the young man’s forehead and to stare directly into his tired yet determined gaze. It is impossible to look away and ignore what this man is feeling. I feel his exhaustion from the fight that he must keep fighting, and the pain from his own story. Today—55 years later—that same pain is still present and the fight for human rights for all continues.

The first of the Selma to Montgomery marches was led by Rep. John Lewis, then Chairman of the Student Nonviolent Coordinating Committee (SNCC), and Hosea Williams of the Southern Christian Leadership Conference (SCLC) on March 7, 1965. Lewis fought for change throughout his lifetime and until his recent passing on July 17, 2020. In 2013, Lewis noted the importance of the arts in the fight stating, “Without the arts, without music, without dance, without drama, the civil rights movement would have been like a bird without wings.”

The following article by Matthew Schwartz for NPR on July 26, 2020 tells more of Lewis’s story and that of the marches that both Lewis and the young man in Davidson’s photograph participated in:

“The body of John Lewis crossed the Edmund Pettus Bridge one last time on Sunday [July 26, 2020] in what organizers described as “The Final Crossing,” part of a multiday celebration of the life of the civil rights icon.

Lewis’s flag-draped casket was pulled across the bridge by a pair of horses, as a crowd of onlookers gathered at the side of the road. It rolled atop a carpet of rose petals, as Lewis’s family walked behind it.

In March 1965, a 25-year-old Lewis and hundreds of other civil rights advocates planned to march from Selma to Montgomery to draw attention to the need for voting rights in the state, which was infamous for denying African Americans the right to vote.

“We’re marching today to dramatize to the nation, dramatize to the world, the hundreds and thousands of Negro citizens of Alabama that are denied the right to vote,” Lewis said. “We intend to march to Montgomery to present said grievance to Governor George C. Wallace.”

But as Lewis led the group across the Edmund Pettus Bridge in Selma, he saw a line of white Alabama state troopers blocking their path. The commander’s orders were clear: Wallace had proclaimed the march illegal.

“You’re ordered to disperse,” said Maj. John Cloud of the Alabama Department of Public Safety. “Go home or go to your church. This march will not continue.”

Lewis and his group did not disperse.

The line of troopers walked forward, billy clubs out. They knocked Lewis to the ground and struck him on his head. He tried to get up; they hit him again with the billy club. His skull was fractured.

Lewis didn’t die that day. Images from “Bloody Sunday,” as it came to be known, were broadcast across the nation. The ensuing coverage helped lead to the passage of the Voting Rights Act of 1965, which prohibits racial discrimination in voting. And it catapulted Lewis onto the national stage and to a more than 30-year career in Congress as a representative from Georgia.”

About Bruce Davidson during the civil rights movement via Magnum Photos: “On May 25, 1961, Bruce Davidson joined a group of Freedom Riders traveling by bus from Montgomery, Alabama, to Jackson, Mississippi. The actions of the Riders tested federal laws permitting integrated interstate bus travel. These historic episodes, which ended in violence and arrests, marked the beginning of Davidson’s exploration into the heart of the civil rights movement in the United States during the years 1961–1965.”