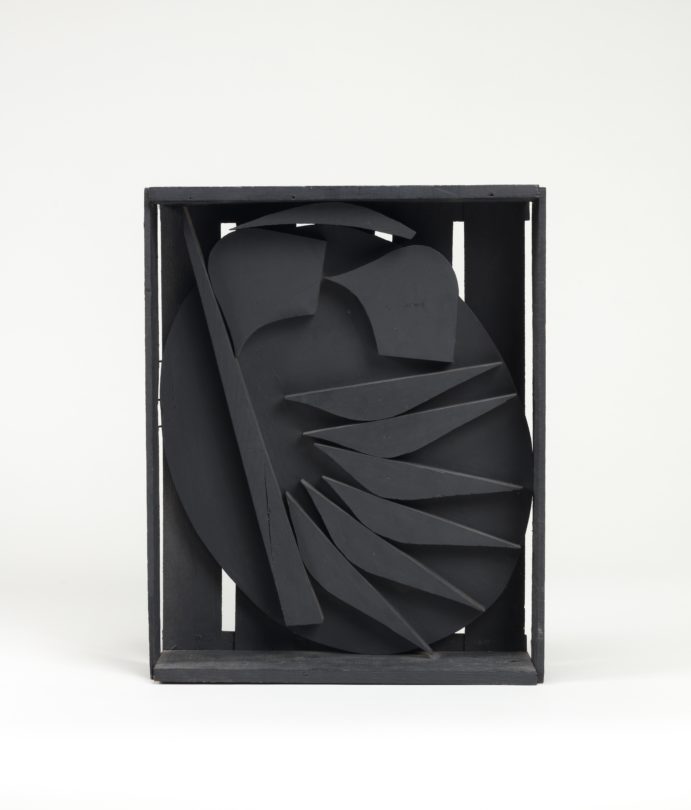 —Terrie Sultan, director of the Parrish Art Museum and curator and author

Louise Nevelson is remembered as one of the most significant sculptors of the 20th century. Her work Untitled (1958) is characteristic of Nevelson’s sculptural style and her consistent use of monochromatic painted wood. By the late 1950s major art institutions including the Whitney Museum of American Art and the Museum of Modern Art started to acquire her work, thus indicating her professional recognition within the institutional art world. This rectangular black box, currently on view in the SECU Collection Hall at the Museum, contains inside it a variety of irregular geometric elements all painted in the same dark color. There does not appear to be a central organizing structure to the interior arrangement of the shapes besides the loose suggestion of a spiral. As my eye attempts to make sense of the apparent randomness of forms, the uniform blackness characteristic of Nevelson’s sculpture makes it difficult to perceive depth.

Nevelson’s assemblage poses questions involving the relationship between individual objects suspended within a contained space and between the boundaries of interior and exterior. Notice also that the box itself serves as a singular unit or building block. In other examples of Nevelson’s work, the artist stacks these units to produce larger scale sculptures. Such a configuration is also suggested in another work of Nevelson’s in the Museum’s holdings, a screenprint titled Composition, 1967 (1967). The motif of the building block or wooden crate in both Untitled and Composition, 1967 suggests the sculpture’s ability to grow in scale and modify, and the interior compositions within each unit reveal the possibility to reorganize and perhaps even reconceptualize new configurations from a set of objects. Nevelson was even known to reuse sculptural elements, suggesting a degree of material confluence between works in her larger oeuvre.

When I look at Nevelson’s Untitled, I can’t help but also think of Wesley Clark’s monumental installation, My Big Black America (2015) displayed one level below in the Museum’s Windgate Foundation Atrium. Both artists construct their sculptures out of reclaimed wood scraps either painted or stained black. Clark’s wall hanging takes the shape of the United States of America. The loose indication of state lines, both present in and self-projected upon the work, represent smaller components that form a larger whole. Embedded within the composition are recognizable fragments of everyday household furniture including chair backs and legs. The use of common and relatable household objects like a chair is significant, signaling a connection between the intimate material space of the home and the geography of the country represented in Clark’s map of the United Stated that questions the boundaries between the personal and the political also echoed in the possessive tone of the work’s title. The surface is textural, historical, labor intensive, and in a state of progress.

Nevelson and Clark’s wooden sculptures work in dialogue between the levels of the Museum. Despite differences in scale and meaning, the material basis of this comparison illustrates the continued legacy of artistic styles like Cubism, Constructivism, and Abstract Expressionism to provide a visual vernacular fit to morph and develop across time and space.