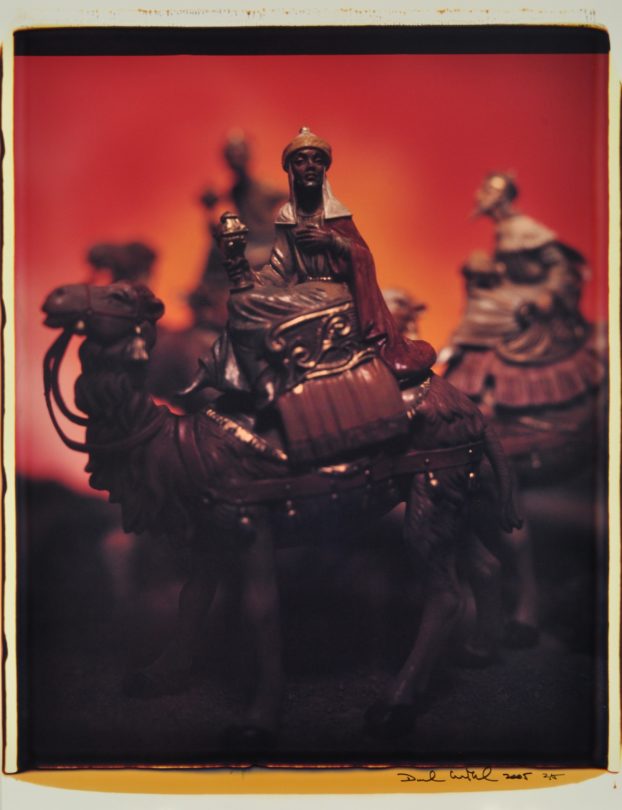 The Museum’s collection of photography has grown exponentially in the last five years. Since 2015, large bodies of work have been gifted by both generous collectors and the artists or artists’ estates. Some of these photographers include Johnny Alterman, Bruce Davidson, Sally Gall, Walter Iooss, Robert Glenn Ketchum, David Levinthal, and Joyce Tenneson. My favorite photographs are taken by David Levinthal.

Like every kid, I enjoyed playing with toys. Whether it was getting the gift of an action figure—my favorite characters were the Teenage Mutant Ninja Turtles and Dragon Ball Z—on my birthday or for Christmas, I frequently created endless alternate universes and stories with toys from any of the 1990s cartoon tv shows. Capturing the imagination that goes into creating a story as well as the physical display and movement of these figures is something that Leventhal does so well.

For more than two decades, setting up the nativity scene has always been one of my favorite and most memorable Christmas traditions. This photograph can easily be identified as the three wise men who are traveling to Bethlehem to see the infant Jesus. Although much of western society is aware of this story, Levinthal has given the viewer a visual representation of a small part of that story to imagine it better or even different than it’s described in the gospels. Visually the photograph is stunning with the red and orange aura of the sky and the gold adornments on the camels and magi. I envision the sun setting in the desert and the wise men getting ever closer to their destination. The Museum is very fortunate to have not only representations of the Passion series of photographs, but others including American Beauties, Barbie, Baseball, Blackface, and Wild West.

David Levinthal is both a renowned artist and a dedicated collector. His photographs portray recognizable scenarios painstakingly constructed from his vast collection of hand-painted toys and playsets. Using these small objects, he has explored such diverse topics as the “Old West,” the Civil War, the American family, and baseball, amongst others. In Levinthal’s hands these constructed and photographed scenes can embody stereotypes, archetypes, cinematic conventions, or mythic fictions. Taking advantage of the large-format Polaroid 20 × 24 camera’s shallow depth of field and using a sepia tone for his photographic mise-en-scène, or stagelike setting, Levinthal’s portrayal of three wise men feels like a portrait.

—Terrie Sultan, director of the Parrish Art Museum and member of the Luce Project Team