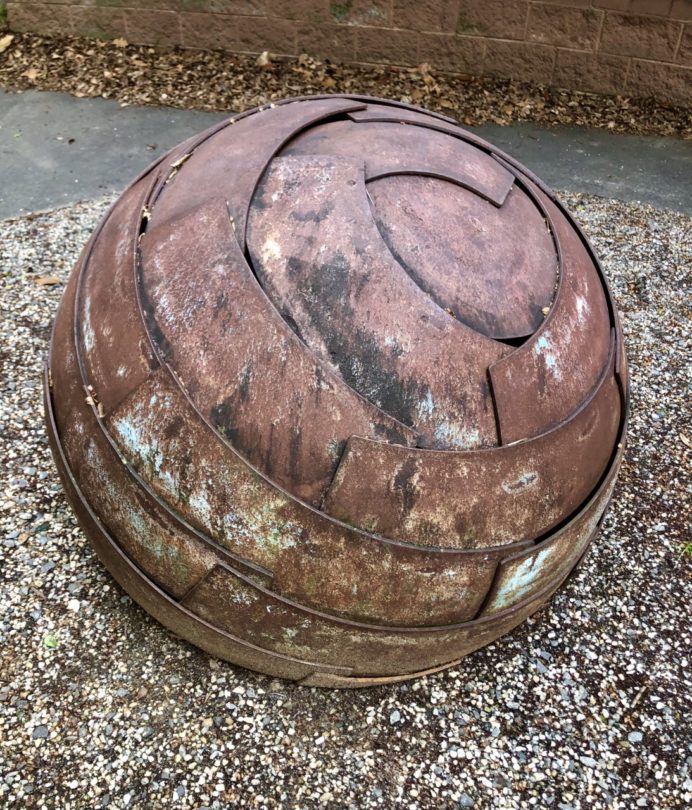 The Museum has several works from across Hoss Haley’s career, including the commissioned work Cycle. This untitled work is an excellent example from Haley’s Spheres series, which examines the form in a variety of media. Often, the spheres are situated environmentally to invite the viewer to consider the object’s relationship to the space around it. This sphere is in fact not completely round but cut off at the bottom to visually create the sensation of the work being embedded or having sunk into the ground beneath it. This sculpture is currently displayed outdoors in the Museum’s courtyard and can be easily viewed through the large interior windows.

Haley grew up on a farm in Kansas, learning to weld at an early age. A three-year residency at Penland School of Craft in the late 1990s prompted his permanent move to Western North Carolina as well as a change in his process, from hot to cold working metal, frequently with tools he made himself. He favors industrial materials and fabrication methods, often building or adapting the machines and tools he uses to produce his two- and three-dimensional works from steel, concrete, and bronze. While visiting the Museum, be sure to take a moment to look out the windows of the main stairs to appreciate the effect of the seasons on the work—it may be drenched in rain, blanketed in snow, or sprinkled with yellow fall leaves.

Nearby, Haley’s well-known public works Pack Square Fountain and Pergola—both constructed in 2009—can be found.

Learn more about Haley and his work at http://hosshaley.squarespace.com/about.