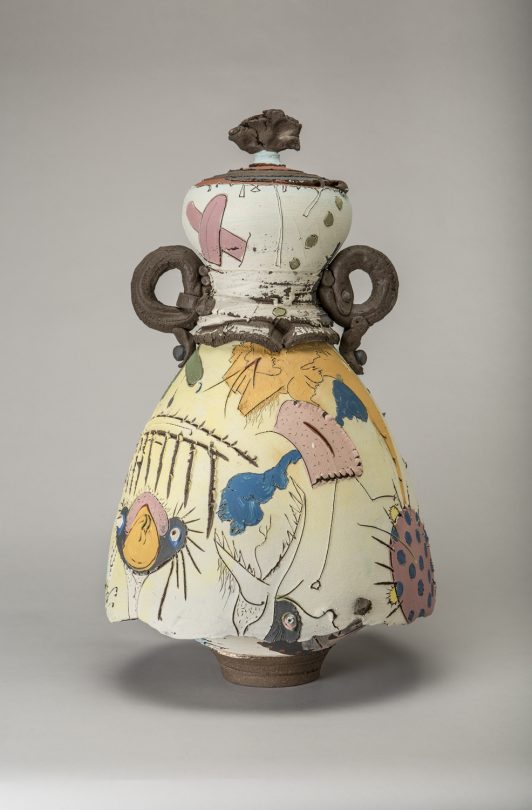 I like a good story and if there’s a chance to learn, all the better. This leads me to share the story of Don Reitz’s colorful vessel from what’s known as the Sara Series. Until April 5, 2021, it’s among the works in the Fantastical Forms: Ceramics as Sculpture exhibition on the Museum’s third level in the Moore Gallery. The vessel is the result of a story with several chapters and a happy ending.

Reitz (1929–2014) had a 50-year career as a ceramist who described his medium as dirt rather than clay. He was working in a period when the art form went through great change and experimentation. Old rules were being broken not unlike painters inventing Abstract Expressionism. Reitz was an experimenter, not stopping at throwing even banana peels into the kiln to see what would happen. Always interested in playing with his glazing techniques, he became quite well-known for bringing back the ancient process of salt-glazing. In a New York Times article, the artist recalled, “I will never forget the rush I felt when I threw in my first handful of salt. It started to snap, crackle and pop, and burned little holes in my shirt.” But then, just as quickly he pivoted and changed his style completely for works like this piece in his Sara Series.

In 1982 Reitz suffered serious injuries in a truck accident. Shortly afterward his five-year-old niece, Sara, was diagnosed with cancer. The two exchanged drawings as they healed. In time, inspired by Sara’s sketches, Reitz executed work with childlike lines and a paint palette of bright colors.

The Sara Series is unique in his body of work. Having an artwork from that series among the Museum’s Collection is the happy ending to that chapter of Reitz’s notable life. Knowing the story caused a 180° turn in this docent’s head. What at first glance looked like a beginner’s attempt with pottery became appreciated for the storied artwork it really is.

Reitz’s early years were spent in the north. He earned his MFA at New York’s Alfred University, subsequently accepting a teaching job at the University of Wisconsin, thinking he would stay a year. From his autobiography, “The fact was I was brought in to free Harvey Littleton so he could start the glass renaissance. I was free to teach as I pleased. We were hired as artists who also teach, not as teachers who were formerly artists. Because of this, I stayed 26 years.” The artist moved to Arizona in 1987 where he could work year-round while remaining a lifelong educator.

In addition to the Asheville Art Museum, Reitz’s work is in the collections of the Smithsonian Institution, the Museum of Arts and Design, New York, the Museum of Fine Arts, Boston, and elsewhere.