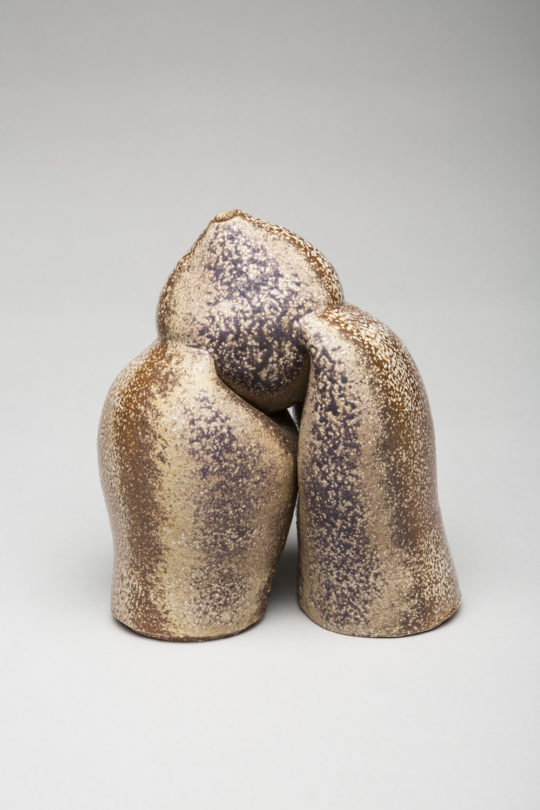 This sculpture by Karen Karnes is from an intimate series created later in her career as a ceramicist. She was a trailblazer in the ceramic community, known for her extraordinary talent as a studio potter and sculptor. The evolution of her work was influenced by experiences and events throughout her life. A prevalent idea Karnes explored through her art was the relationship between people, evident in this sculpture. One can observe that she assembled separate parts to create a unified whole. It almost seems as if the cylindrical forms at the base are working to lift and support the bulbous form on top. The interaction between the individual components gives this piece a sense of motion and brings life to the sculpture. The playful curves are inviting, but the guarded interior creates a sense of vulnerability. I am drawn to the tight, shadowed spaces in the center that feel safe and protected. The narrow hole Karnes left further suggests a reluctancy to fully open, but still leaves an opportunity to enter. Although this piece is small in scale, it reflects over half a century of observation and delicate contemplation of the community that shaped Karnes.

Karnes was the Potter in Residence at Black Mountain College in the 1950s, where she met inspirational figures like potter Shōji Hamada, and artists John Cage, and Merce Cunningham. She later lived and worked at an artist community in Stony Point, NY, and continued to make lidded jars and casserole dishes from a flameproof stoneware clay body of her own creation. While teaching at Penland School of Craft, she fell in love with the atmospheric kiln firing process of salt glazing. She was active in the American Craft Council and participated in the Southern Highland Craft Guild. Karnes spent most of her life in intense communal working environments and learned how to live as an individual within a community. Eventually, she made a significant move to rural Vermont, after which she began to explore sculpture and scale in ways she had not previously. She experienced a devastating fire in her Vermont studio that destroyed her home but was met with an outpour of love and support that deeply moved her.