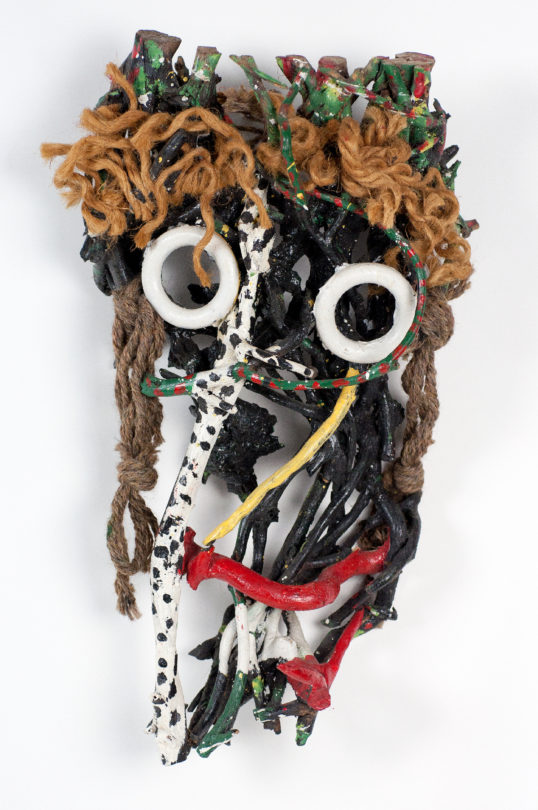 Harvey’s work encompassed both the secular and the religious worlds. This untitled mask is an example of the former category. Much of her early work was targeted by local rumors of associations with voodoo practices, and she destroyed a great deal of it, as voodoo was not compatible with her Christian faith. She worked mostly in wood and paint but also created ceramic sculptures, usually small and unfired. She is best known for her African-inspired subject matter and her religious sculpture.

—Contributed by Andrew Glasgow, the retired Executive Director of the American Craft Council and a curator and author on the Craft Revival, contemporary Studio Craft, and Outsider artists.

What are masks? They appear in all cultures throughout history: in Greek theater, in Chinese art, in Native American works as emblems of a clan, in African fertility and rite-of-passage ceremonies, in Picasso’s Les Demoiselles d’Avignon, in Mexico’s El Día de los Muertos celebrations, in the annual carnivals of Venice, Rio de Janeiro, and New Orleans, and beyond. I’m fascinated with masks and collect them as a reminder that we all wear one figuratively, at least some of the time. What draws me to this mask are the materials the Artist chose to use; bits of wood and scraps that she might’ve found around the house from which she imagined the shape of a face.

Born Bessie Ruth White on October 11, 1929, in Dallas, Georgia, Harvey was the seventh of 13 children born to Homer and Rosie Mae White. In the mid-1970s, Harvey began assembling sculptures from roots and other found objects seeking an outlet for a visionary gift she discovered in her childhood. When she was young, her active mental landscape provided a separate world in which she found welcome sanctuary from her troubles. Harvey also found inspiration and comfort in her natural surroundings. From early memories of nights spent on a mattress of pine needles, the artist maintained a close relationship with nature and was attentive to its ebb and flow. She prayed aloud and talked to trees, birds, and clouds, which she perceived as benevolent forces capable of nurturing those who took time to call upon them. These natural entities, especially trees, were seen by the artist as far more than just part of God’s creation. The Artist also drew strength from her mother’s strong Christian faith and found additional comfort in her own ability to give shape to her visions using her hands and ordinary objects. Since her death in 1994 and her inclusion in the 1995 biennial of the Whitney Museum in New York, her sculptures have become more and more desirable, rapidly escalating in price.