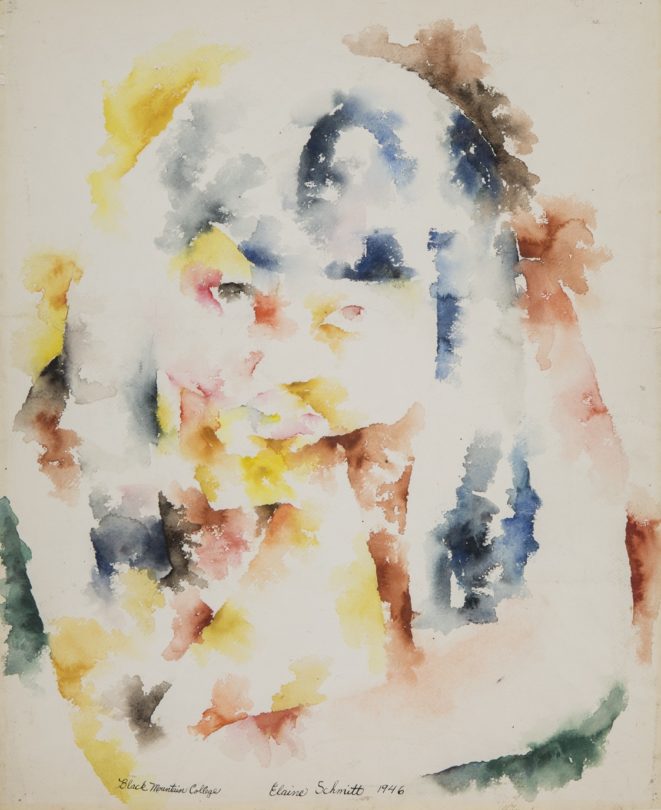 In 1946 Elaine Schmitt Urbain was living, working, and making as a student at Black Mountain College (BMC) alongside faculty, students, and staff from diverse backgrounds and lived experiences, many of whom were already recognized as experts in their fields and some who would go on to become household names. Open from 1933–1957 and recognized as a locus of avant-garde activity, BMC operated as an experiment in interdisciplinarity, aligned with pedagogical theory influenced by John Dewey and liberal arts frameworks that encouraged questioning the prevailing structures of education at the time.

I’ve given you this abbreviated BMC context to draw attention to the fact that this exquisite watercolor, rife with such depth and intersecting history, is an example of student work. As is common in many creative communities, artists collaborate with their peers and cohorts to make artworks, and this abstracted portrait of Ruth Asawa by Schmitt Urbain was made while both were students in Josef Albers’s class. At first glimpse, this watercolor may appear to be an abstract color study, or perhaps a figure is seen immediately. I find it easiest to recognize Asawa by starting to look about a third of the way from the top, where her eyes may be most easily seen. The rest of the face, the framing of her hair and bangs, and Asawa’s arms come into view shortly after. Depicting Asawa with her face resting gently on her right hand seems a delightful touch, considering both artists were likely used to striking such a pose in class. I’ve seen visitors to the museum approach this work and step forward and back as if they’re focusing their vision on a magic eye optical illusion, their joy palpable when a figure is discovered.

As an art educator at the college level, I often try to encourage my students to consider their class assignments as their “real work.” What do I mean by this? Too often students in any field are instructed to consider themselves amateur until reaching a specific level of accomplishment in order to be considered proficient. This is certainly important in some cases, such as forklift certification—one is either capable of operating this heavy machinery or not. But in the practice of art, on whose authority does one become proficient? Many students fail to see, or be encouraged to approach, their assignments as their own work, but rather treat student work as a necessary mile-marker on the road to becoming an artist. I lean heavily on BMC pedagogy in my own classes, encouraging students to think about assignments expansively, and I show them student work from BMC like this.

While future collectability was certainly not considered at the time of making, the student work from BMC is now widely collected and held in high regard, as examples of the early genius of many BMC affiliates who went on to be considered art-historically relevant, as well as the overall fascination with BMC pedagogy. Many venerated BMC objects in collections all over the world were made while these individuals were students or educators at BMC.

This student work invites us to consider the environment within which Schmitt Urbain was learning and making art. By whom was she most readily inspired, and how did their student experience at BMC form their art practice and the rest of their lives? Spoiler alert, she married one of her classmates at the time, John Urbain, whose student work is also held in the Museum’s Collection. This painting shows us that process is important, that student work can indicate proficiency, and that intention doesn’t always affect the impact of a work. Its subject, composition, and color palette exemplify the culture of experimentation and collaboration prevalent at BMC.

What else can we learn from this, and the other student works by BMC artists we have on view?

While a student at Black Mountain College during the 1945 Summer Art Institute and academic year through the 1946 Summer Art Institute, Schmitt Urbain studied intensively under Josef Albers, in whose class she met her future husband John Urbain. She explored the use of color through watercolor studies that were assigned in Albers’s painting class, taking still lifes of lemons, bottles, and violins, as well as gestural human forms and portraits as her subjects. As with many students and faculty, the artist drew upon her peers as ready sitters, including Ruth Asawa, depicted here. Despite the formality of the assignment, Schmitt Urbain captures the warm presence of her life-long friend.